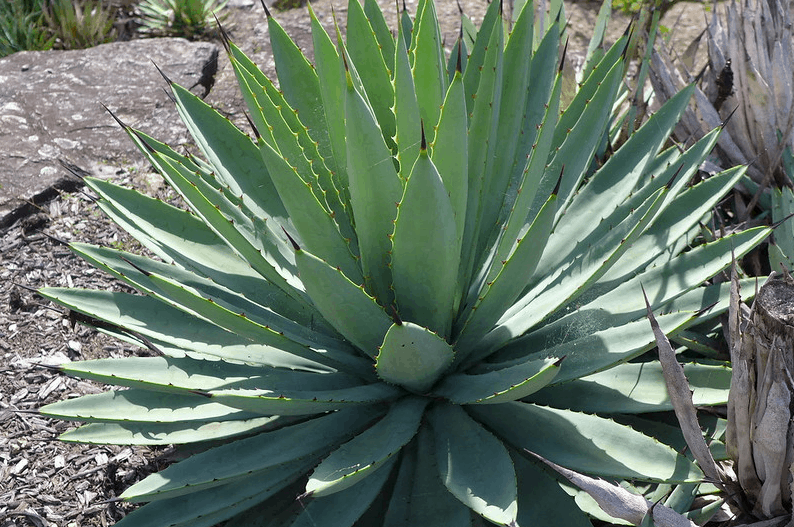 The genus Agave macroacantha belonging to the Amarilidaceae family, is made up of about 350 species of succulent plants from Mexico, the Southwest of the USA and Central America.

Rosettes have narrow blue-gray leaves that spread evenly and expand outward from the center of the plant.

The leaves have straight margins with small dark brown teeth and a long terminal spine.

When this plant begins to bloom, the leaves of the center acquire an attractive reddish hue from where the dark red inflorescence begins to emerge.

The foliage is thick with the shape of a sword blade and it is marked by very strong small thorns of black color and another one at the end of the same color but much larger and more threatening.

Tips to take care of the Agave macroacantha “Black-spined Agave”

As the vast majority of succulents, the Black-spined Agave is very susceptible to excess water, so the substrate must be well-drained to prevent the roots of the plant from rotting or filling with fungi. This plant can live in poor, dry, sandy or rocky terrain.

As mentioned earlier, succulents are susceptible to water.

That is why they should be watered in moderation, waiting for the substrate to dry completely between irrigation and irrigation.

In autumn and winter times the irrigation should be even less.

It is important to leave the substrate completely dry before the next irrigation.

Do not be afraid not to water it, since this plant withstands drought very well, and it is easier for the plant to die from excess water, than from drought.

You can have it in the garden in full sun, without any problem.

If you have it inside it is important that you have it near a window where it receives sun for several hours, so that the plant can grow healthily.

They can withstand some frost of low intensity.

This plant is not usually paid, but we can give a slight contribution of mineral fertilizer for cacti and succulents in spring.

Pruning is not necessary.

If the plant has a damaged or damaged leaf, you can remove it so that the plant is visibly more attractive.

They are plants that are not usually attacked by the usual pests and diseases.

The easiest way to multiply the Black-spined Agave is from the little plants that the plant produces and that can be separated when the pot transplant is performed.

It is also possible to do it from seeds sown in spring in seedbed.

Agave macroacantha has toxic sap, as well as sharp spines along the stem. Be careful when handling or propagating this succulent.

This plant is really beautiful and different, it will certainly add a special touch to your garden.

It is an ideal plant to start growing plants, since it requires very little care, they do not need to be pruned and are resistant to drought