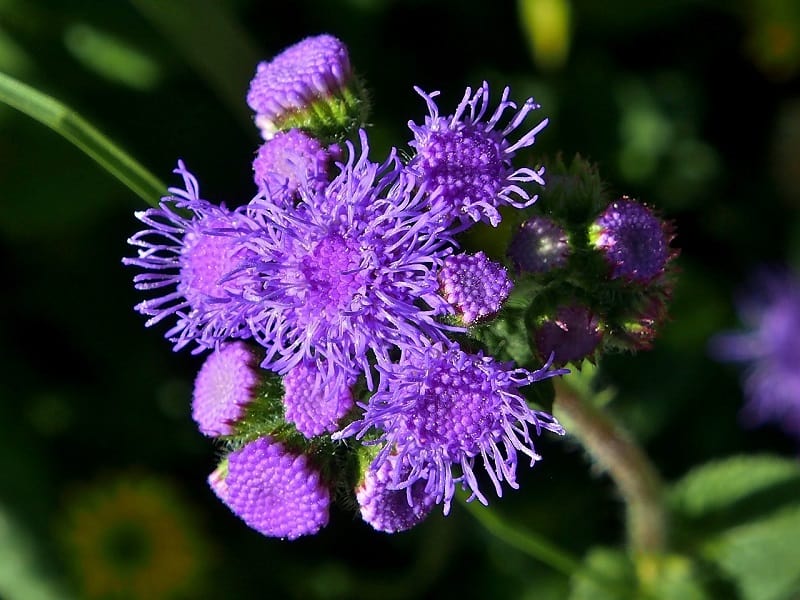 Usually grown as an annual; perennial in Zones 10-11.

Full sun to partial shade. Ageratum plants will flower best in full sun; too much shade can result in less blooms and leggy plants. In hotter regions, plants benefit from afternoon shade.

From late spring to frost.

Also known as floss flower for its floss-like petals, the tiny blooms resemble fluffy pompoms. Flowers are produced in dense clusters in colors of blue, purple, red, white, or pink.

Leaves are medium green and oval or lance-shaped. Plant habit ranges from short and densely compact to upright and loose.

The Ageratum Houstonianum Flower can be toxic to grazing animals, causing liver lesions. All parts of the plant are poisonous and may be harmful to pets or humans if ingested.

Call poison control or your local veterinarian for advice if necessary.

Ageratum houstonianum flower is an annual herbaceous of tropical origin that cannot be missed in a garden, because it not only provides the colorful attractiveness of its flowers from late spring to the first frosts, but also adapts to any type of soil, is rarely affected by pests, and is a great attraction for butterflies.

This species of the genus Ageratum is characterized by having a rigid, erect stem, hollow inside and unbranched from which the leaves grow directly arranged alternately, its color is between gray and green, with somewhat jagged edges.

At the top of the stem are the flowers that, depending on the variety, offer some of the most authentic blues that can be found in nature.

Seeds can also be sown directly in the garden after the last frost date, although specimens grown in this way will have a later flowering season.

The ageratum houstonianum flower can be propagated by seed in late winter and early spring when all danger of frost has passed.

Regularly they are sown in containers and once germinated they are transplanted in groups of a dozen or more so that at the moment of flowering they offer a better visual spectacle.

They can also be grown alongside other annual flower plants, such as sage or damask,agapanthus flower so that they are enhanced by the contrast of flower tones.

The specimens of this species grow very well outdoors, so it is recommended to place them in places in full sun, or at least where they receive direct sunlight for a minimum of two hours a day.

Although ageratum houstonianum flower adapts to almost any type of soil, it develops much better in a loose, fresh and well-drained substrate, which must be crumbled before each irrigation, in order to facilitate the oxygenation of the soil, the decomposition of organic matter and absorption of nutrients.

Most cultivars of this species also require that the soil be constantly humid (although without waterlogging), so irrigation should be copious when the ambient temperature is high. In climates where powdery mildew is a problem, watering from above must be avoided and the plant must be in a place with good air circulation.

Pruning the withered flowers of an Ageratum houstonianum is not necessary, but it helps to maintain a neat appearance and tends to promote better-uninterrupted flowering.

No serious insect or disease problems. Watch for aphids and whiteflies. Powdery mildew is an occasional problem, particularly in hot and humid climates where soils are kept on the dry side and air circulation is poor. Root rot may occur in poorly drained soils. Taller plants usually benefit from some support.

The name Ageratum has a Greek origin meaning “that lasts a long time”. It has its origin in Mexico and Peru and is part of the Composita family. Vulgarly known as Agerato or Damasquino.

Ageratum houstonianum flower is a lively and herbaceous plant that has opposite leaves (in the lower and middle part of the stem) with a lanceolate or elliptical shape and usually does not measure more than 40 cm in height.

Its small flowers appear in chapters that, in turn, do it in corymbs (type of inflorescence) and can be purple, pink, blue, white or lilac. Its flowering period ranges from early spring to late fall.

They should be placed in full sun in colder climates and in half shade in warmer climates. It is used for flower beds and curbs.

Irrigation should be regular and will increase in the hot season. During flowering, it is advisable to fertilize with liquid fertilizers.

The ageratum houstonianum flower can be attacked by aphids and the roots can rot due to excess watering.

They can be multiplied by seeds sown in late winter. The problem will be the transplant since it does not tolerate it very well and it is better to do it when they are about to produce flowers.