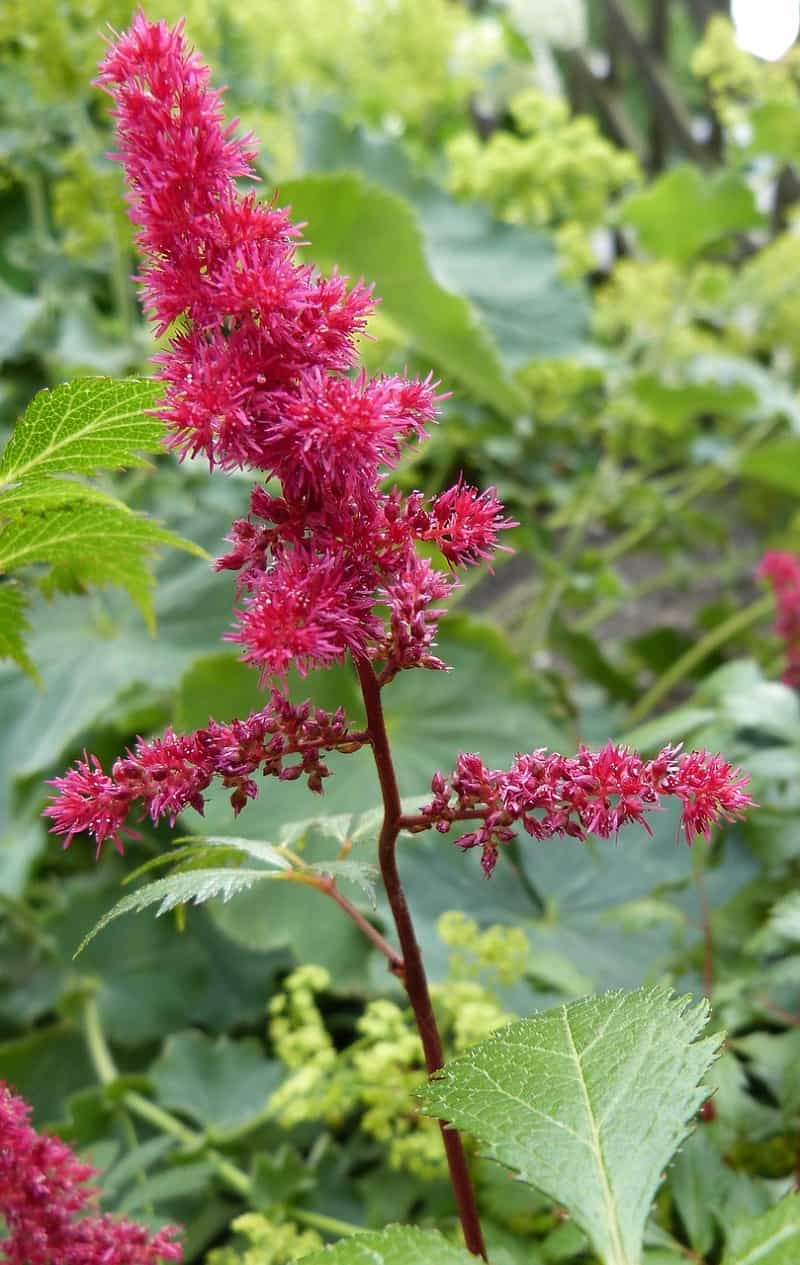 Astilbe Flower is a plant that produces a large number of flowers that grouped into inflorescences in a very interesting size, this makes it a highly cultivated botanical genus, both in pots and planters and directly in gardens.

It does not need complicated maintenance; in fact, it is considered to be suitable for beginners because with minimal attention it will be healthy, as well as precious.

The Astilbe Flower is a very decorative plant, is made up of a dozen species native to eastern and southern Asia.

They are lively perennial herbaceous plants that grow to a maximum height of one meter, and that produce leaves made up of opposite leaves, with slightly jagged margins, green in color.

They bloom in summer, which is when their inflorescences sprout in the form of feather dusters that can be pink, red, white or yellow.

The most recommended are:

Astilbe chinensis: native to Japan and China, it reaches a height of 40 to 50cm and produces pink, purple or white flowers.

Astilbe japonica: known as Japanese astilbe, it is native to Japan, reaching a height of about 50cm. Produces red, pink, or white flowers.

Astilbe rubra: native to China, Japan and Korea, it reaches a height of 70 centimeters and produces magenta flowers.

Astilbe thunbergii: it is native to Japan and China, reaches a height of up to 1 meter, and produces pink or reddish flowers.

How to care for the Astilbe Flower(False Goat’s Beard)

Astilbe Flower is an easy plant to care for just follow these steps.

Astilbe is a plant that has to be in a bright area but without direct sun. It adapts very well to places with partial shade.

It has to be placed outdoors if its place inside your home it will not flower and if it does, well, they will look like dead flowers.

Flowerpot: it is important that the substrate to be used, is capable of retaining moisture for a time but that they also have good drainage.

Astilbe Flower does not resist drought, but neither does it like to have “wet feet” permanently. So a good mix would be great, for example, a universal growing medium can help with 30% perlite.

Garden: with garden soil, you must take into account the same as with that of the pots. Drainage is essential so that the roots do not have problems. But if your soil is very compact, don’t worry: make a planting hole of about 30cm x 30cm (better if they are 50 × 50), cover it with shading mesh and then fill it with the above-mentioned substrate.

Irrigation is another topic to talk about, and one that is quite serious indeed; not surprisingly, water is essential for life.

But beware: by adding more water it does not mean more live fore the plant; in fact, what tends to happen when overwatering is that the roots suffocate and die. With this in mind, to avoid problems you have to put a well-drained substrate or soil, but you also have to know when to water.

To know whent to water it depends on the climate and the location of the plant. In general, it is watered much more in summer than in winter, because the temperatures are higher and the land dries faster. But this is not always the case.

If you live in an area where it rains regularly you will not have to spend as much time on this task.

For this reason, the most advisable thing is to always check the humidity of the soil, either by inserting a thin wooden stick (if it is practically clean when you extract it, you will have to water the plant).

Use whenever you can rainwater. In the event that you cannot get it, fill a basin with the tap, and let it sit for a minimum night so that the heavy metals “sink”, stay completely down. Then you will only have to take the water from the upper half of the container, without making too sudden movements.

In spring and summer it is highly advisable to fertilize your Astilbe with fertilizers such as guano in its liquid form if it is in a pot or planter, or with others such as compost, earthworm humus, or herbivorous animal manure.

It is multiplied by seeds in summer or division.

Let’s see how to proceed in each case:

First, you have to put them in a glass with water for 24 hours.

The next day, discard those that have been floating since they most likely will not germinate.

Then, fill a seed tray with universal growing medium mixed with 30% perlite.

Next, sow a maximum of two seeds in each socket, and cover them with a thin layer of the substrate.

Placing the tray outdoors, in semi-shade, and keeping the substrate always moist but not puddled, the seeds will germinate in a month.

To divide the bush you have to:

Extract it from it.

Using a serrated knife or handsaw previously disinfected with drugstore alcohol, fearlessly cut in half (vertically, from the ground surface down).

Plant the piece in another pot or in the ground.

Make 2-3 ditches around the plant about 40cm deep.

Cut with a serrated knife and saw in half.

With a hoe, separate the piece you want, trying to get it out with the root.

Plant it somewhere else.

The Astilbe Flower resists frosts of up to -12ºC, although it prefers warm climates, without low temperatures, since with these conditions it usually loses the aerial part (leaves). It also withstands heat up to 40ºC if the substrate or soil is damp. The Astilbe blooms every year

What is the meaning of the Astilbe flower?

Astilbe’s flower has had something positive: it is the representation of hope. Perhaps that is why it is used so much in bouquets for brides or homes.