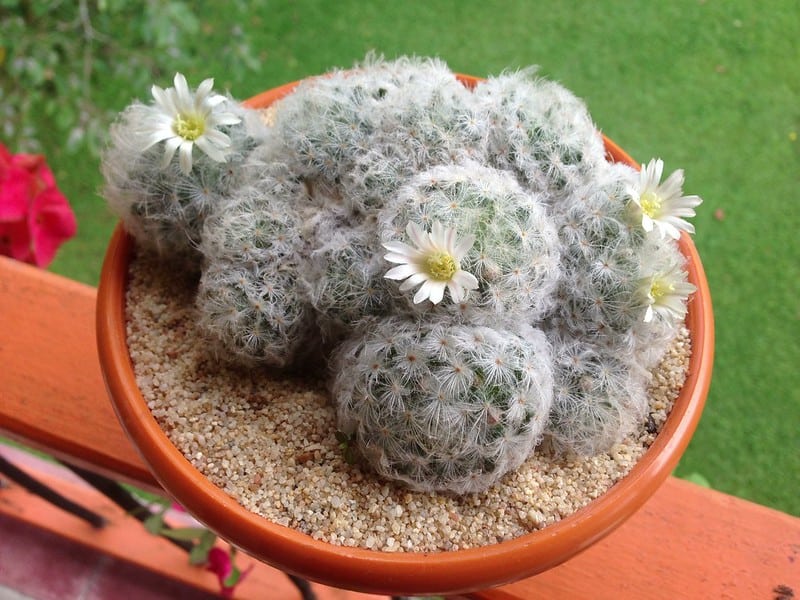 Mammillaria plumosa ‘Feather Cactus’ is a small globose and colonial cactus very popular in collections around the world for its exotic morphology.

It is a native species of Mexico but its ornamental value has allowed its introduction in gardens of other continents.

This high ornamental value has caused a worrying reduction of its natural populations due to illegal extraction for commercial purposes or by collectors (very shortly it may become extinct).

The Mammillaria plumosa is characterized by forming small colonies of approximately 50 cm in diameter or more; An individual cactus does not exceed 7 cm in height or 10 cm in diameter.

The stem is globose formed by numerous mammals of +/- 1.5 cm long; Each Mammillaria plumosa has a dark green coloration.

In the terminal region, the mammals have numerous radial spines (this species does not develop central spines) approximately 1 cm long, with numerous lateral bristles (similar to a bird’s feather, hence its epithet: feathery) and white color.

These radial spines are so numerous that it is almost impossible to observe the mammoths of the cactus.

They are small (+/- 1 cm long and diameter), with pale yellow petals and radial symmetry.

In the center of the flowers, there is a yellowish-white multilobed stigma and numerous stamens.

Tips to take care of the Mammillaria plumosa ‘Feather Cactus’

Mammillaria plumosa is easy to grow in the garden but is susceptible to excess water being its main enemy. Then your basic care:

It is a cactus that needs a lot of light to grow healthy and bloom.

Although many species of the genus appreciate the direct sun, it prefers to grow in semi-shade or under filtered sunlight.

It can be exposed to the sun during the early hours of the morning and the end of the afternoon before twilight.

It requires a climate where high temperatures predominate.

Its optimum range is between 15-30 ° C. Although it tolerates temperatures somewhat below 10 ° C, we do not advise exposing it to avoid possible rot.

It needs to grow on a very porous substrate where water drains very fast because it is susceptible to rotting due to prolonged stagnation.

It is recommended to use substrates prepared specifically for cactus and crass with an addition of a layer of gravel or coarse sand.

Water whenever the substrate dries completely but without flooding it.

In summer it requires more frequent watering while in winter it must be drastically reduced.

It is not frequently attacked by pests but if it reaches a mealybug it will be very difficult to detect because they are housed in the base of the mammals.

That is why we recommend checking it occasionally by moving the radial spines a little to expose the mamilas.

Through the division of small children that arise on the sides of the cactus or from seeds.

From cuttings, use a sterile, sharp knife or pair of scissors. Remove a stem from the main plant, and allow it to callous for several days before placing on well-draining soil. Water whenever the soil has dried out completely.

With some effort, seeds from Mammillaria plumosa can be harvested from the fruit of the plant. Allow the fruit to over-ripen, then remove the seeds. Clean the seeds and let them dry before planting in well-draining soil.