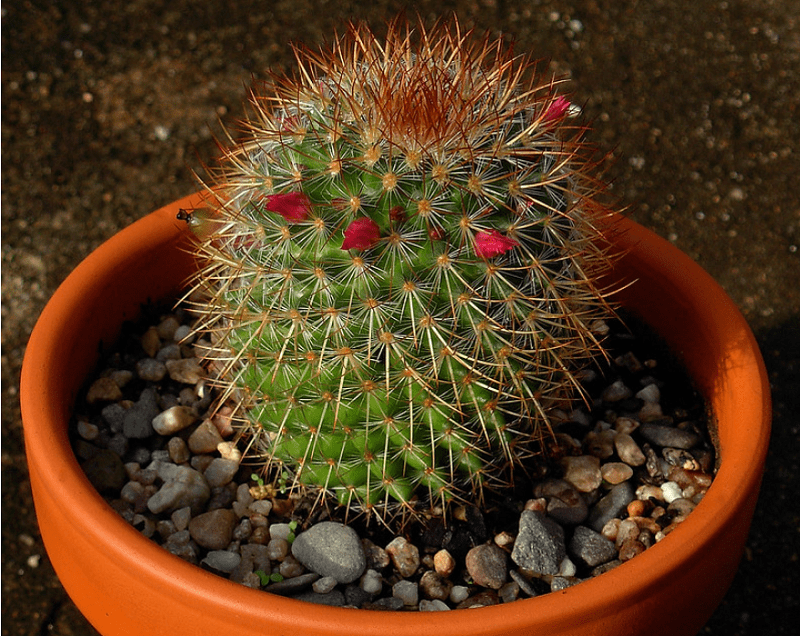 The spines are the more variable of the trait and a great variety of forms can be found in cultivation.

Stem: Short cylindric or clavate, dark green, usually ranging from 15–30(-40) cm in height and up 8-10(13) cm in diameter. White wool can be seen growing on the top part of the plant body.

Tubercles: Conical to cylindrical, without latex.

Central spines: About 4 to 6 straight, or somewhat curved up to 1,5 cm long, vividly coloured reddish-brown but also straw-coloured or golden yellow.

The bottom half of the cactus has spines that are white or grey and appear to be dying.

Blooming season: The species flowers for very long periods of time. It starts blooming in the spring and continues to bloom until summer, but some plant will produce another ring of flowers in late October or even November.

Fruit: 15-25 mm long. Cylindrical to club shaped, purplish-pink frequently greenish at the base.

Tips to take care of the Mammillaria rhodantha “Rainbow Pincushion”

This short, clumping cactus has beautiful magenta flowers that bloom longer than almost any other cacti. It does well indoors, but should be kept out of the way of pets or children, as its spines are quite sharp.

It is a cactus that needs a lot of light to grow healthy and bloom.

Although many species of the genus appreciate the direct sun, it prefers to grow in semi-shade or under filtered sunlight. It can be exposed to the sun during the early hours of the morning and the end of the afternoon before twilight.

It requires a climate where high temperatures predominate. Its optimum range is between 15-30 ° C.

Although it tolerates temperatures somewhat below 10 ° C, we do not advise exposing it to avoid possible rot.

It needs to grow on a very porous substrate where water drains very fast because it is susceptible to rotting due to prolonged stagnation.

It is recommended to use substrates prepared specifically for cactus and crass with an addition of a layer of gravel or coarse sand.

Water whenever the substrate dries completely but without flooding it. In summer it requires more frequent watering while in winter it must be drastically reduced.

It is not frequently attacked by pests but if it reaches a mealybug it will be very difficult to detect because they are housed in the base of the mammals.

That is why we recommend checking it occasionally by moving the radial spines a little to expose the mamilas.

Through the division of small children that arise on the sides of the cactus or from seeds.

It can be difficult to harvest and grow Mammillaria rhodantha seeds, but not impossible. After the fruit has over-ripened, cut it open and remove the seeds. Rinse any fruit that may remain, and let the seeds dry.

Sow your seeds in a well-draining soil.

The rainbow pincushion is a small cactus usually ranging from 6 to 12 in (15–30 cm) in height.

The cactus usually grows in small clumps or can be solitary.

The tubercles are conical in nature. It is from these tubercles that the spines arise.

It has spikes that grow from the entire body.

The bottom half of the cactus has spines that are white or gray and appear to be dying.

The flowers are a deep-pink to purple color.

It starts blooming in the spring and continues to bloom until autumn. An orange-brown seed is produced.

Also, there is white wool that can be seen growing on the top part of the plant body.

It is commonly used as a houseplant. It does not need much care throughout the year.

It is small in size and usually only requires a small pot. Since it is a desert plant it does not have to be watered often.

It does not require any special treatment other than plentiful light to encourage spine formation.

It also has flowers for much of the year, making it very visually appealing.