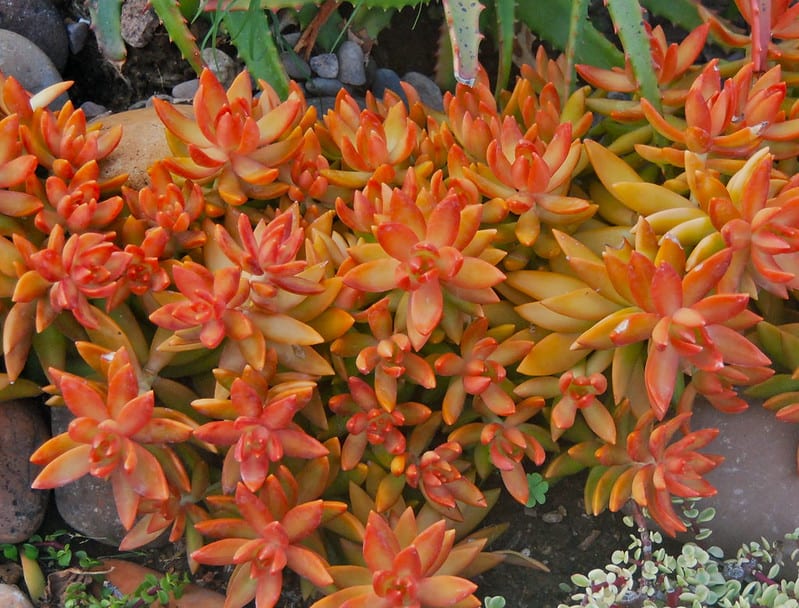 Description: It is a small shrub that forms low mounds of tight succulent stems, these are covered with small, fleshy and very thick leaves.

The foliage and stems are pale green, but as a result of the sun, they acquire a very characteristic and colorful golden hue.

Accommodate: Because of its size, it is a perfect plant to grow in the rockery, or planters for sunny terraces or a window sill.

Flowering period: Between mid-winter, until well into the spring it presents its copious flowering.

Flower: Organize floral stems that do not exceed the height of the foliage, each stem looks dense clusters of small white star-shaped flowers. The flowers give off a soft fragrance.

Situation: It likes sunny locations, this makes it necessary to receive a daily contribution of the powerful sun. It is preferable to lightly sift the afternoon sun in the summer months.

Tips to take care of the Sedum Nussbaumerianum “Coppertone Sedum”

The Sedum Nussbaumerianum prefers to grow on rocky substrates, but it can also be sown on any type of cactus substrate.

It is very important that no matter what type of substrate you use, you must have good drainage to prevent the roots of the Sedum Adolphii from rotting.

The Sedum Nussbaumerianum needs very little water to survive throughout the year since it is very resistant to drought.

It is essential that when watering the Sedum in summer, let the substrate dry between irrigation and irrigation.

And in winter times reduce irrigation as much as possible to prevent its roots from rotting.

A singularity of Sedum Nussbaumerianum is that it adapts admirably to drought thanks to the ability to store water in its thick leaves.

For perfect growth and flowering the temperature between 15-26 ° C.

Tolerates temperature drops if the substrate is completely dry.

The characteristic reddish color of the Sedum will be opposed to full sun exposure.

The Sedum grows perfectly in full sun as well as in semi-shade.

When the Sedum Nussbaumerianumis in semi-shade its leaves have a more greenish color.

You should only take care of the plant from the intense sun of noon in summer.

The Golden is very resistant to pests but some can appear regularly the mealybugs mainly in the unions of the leaves to the stems.

Some mollusks (snails and slugs) can devour sections of the leaves or apical shoots of the younger stems.

It can be propagated from cuttings of stems or leaves.

Just cut a stem very carefully and then let the cuttings (the cutting region) dry for 24-48 hours before being sown.

Then sow the cuttings on a special cactus substrate.

You must only pay the Sedum in small amounts during the spring and summer and stop the subscriber for the rest of the year.

Only use a specific subscription for cactus and follow the instructions on the packaging.

The Sedum Nussbaumerianum bloom in summer.

This is a very beautiful plant to have it decorated in your home or office.

It is also ideal to put them in a pot with other succulents and give a different touch to your collection of plants.

In late winter to spring appear the white lightly fragrant flowers in a flat-topped umbel-like inflorescence.

Plant in full sun to light shade in well-drained soil.

Irrigate little to occasionally. Hardy to at least 28° F. Color will be best in the sun with little water.

A great plant for the rock or succulent garden or in a decorative container. Cut back stems and re-root when plants become too leggy.

This plant was first discovered by Carl Albert Purpus at a sulfur spring in a ravine at Zacuapan in Vera Cruz, Mexico in 1906 or 1907 but was later described in 1923 by the German botanist Bitter who named it for Ernst Nussbaumer, the head gardener at the Bremen Botanic Garden in Germany.

It was in cultivation under this name in California in 1944 or perhaps as early as 1933 as Sedum and was re-introduced by the Huntington Botanic Garden through the International Succulent Institute as ISI 1682 in 1986 from material collected in the wild by Charles Uhl at 550-600m on a rock outcrop near Cerro Gordo, Veracruz Mexico in 1978 (HBG 40419).

This plant was given the marketing name Coppertone by Magic Growers Nursery of Altadena, CA in 2002. The late Dr. Henk t’ Hart and Dr. Bert Bleij wrote the Sedum section in the lexicon “Illustrated Handbook of Succulent Plants: Crassulaceae” (Eggli, Urs (ed), Springer.

Berlin, 2003) and noted this species to be very similar if not identical to Sedum however Robert Clausen in “Sedum of North America North of the Mexican Plateau” (Cornell University Press. Ithaca, 1975) listed them as often confused but separate taxa.

It has become naturalized in Sicily and on the Canary Island of Fuerteventura.

Hope this article was helpful if you have any question please let me know.