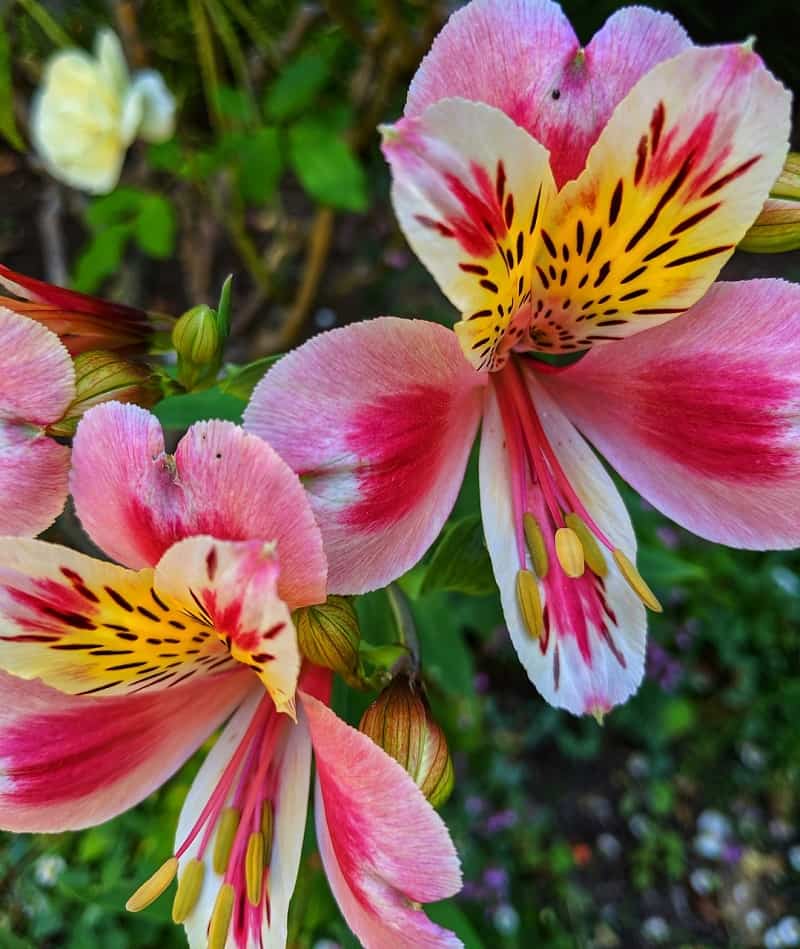 The alstroemeria flower is also called Peruvian Lily,Lily of the Incas or alstroemere; they belong to the family called amaryllidaceae; They have a high size, their petals are long and they have colors grouped upwards, like the lilies, another plant from the same family, read on how to care for alstroemerias.

About 50 species of alstroemeria flowers are of different colors and sizes which also helps to make different combinations in gardens.

It is a plant that can be poisonous and cause irritation, but despite this, it is one of the most cultivated and then cut and used in beautiful flower arrangements.

This plant is rhizomatous, with thick and delicate roots and can grow up to 120 centimeters; blooms in late spring or summer, with purple, red, bright orange, salmon, pink, and white flowers; this flower is not scented.

The flowers will appear on the stems, specifically at their ends, these usually have six petals, 3 on the outside with a larger size and another three on the inside with black or brown markings.

This is what is called zygomorphic, which are flowers that are bilaterally symmetrical, that have three sepals and 3 petals with stripes (not always); both the petals and sepals of this flower are very similar in texture and color, that is to say, that unlike other plants, we did not find solid green sepals; on the other hand, this flower has an indivisible pistil and 6 stamens.

It has long leaves with rather pulpy tips; This plant originates various inflorescences of different colors, they do so by forming a funnel, and then bloom between June and September.

The leaves of the Alstroemeria Flower are opposite, that is, the leaf arches leaves the stem so that the bottom is facing forward looking up.

It is called Alstroemeria thanks to Klas Alstomer, a botanist who was born in Sweden in 1736 and died in 1796; This was a student of one of the most important botanists in history: Linnaeus.

This plant has its origin in South America, more specifically in the Andes in the countries of Peru and Chile; due to this, it receives some of its vulgar names.

The Alstroemeria Flower we could say is new in the market but day by day it is gaining greater interest since it is a pretty beautiful flower, whose cultivation is simple and does not require any special care.

In addition to their beauty, they have a long life.

It is important to cultivate alstroemeria flower (Peruvian lily) correctly in order to have a beautiful garden or to later make beautiful flower arrangements.

This flower is suitable both for planting in the ground or in pots.

How to care for the Alstroemeria Flower(Peruvian Lily, Lily of the Incas)

If seeds of this plant are going to be sown, it should be in the fall, taking care that the temperature is not going to exceed 20º centigrade during the day and that it is between 5º and 10º centigrade at night.

In the southern regions, it will be better to do it in spring. It is good to leave the seeds in water overnight and if they are bulbs leave them in water for 24 hours, this way their germination will be better.

In case they are going to be sown in pots, it is good to do it with a little vermiculite and a little perlite, then make holes of 0.6 centimeters and separate each hole by 2.5 centimeters, then each seed should be put in each hole and finally cover soft with the mixture.

If you are going to plant a single alstroemeria plant, you will have a pot (pot) with a diameter of 40 cm and you must be hanging to protect it from frost.

If it is going to be sown in the ground, it is important to plant it in such a way that its roots are deep and well buried in order to look for flowering from the time of its first year.

The soil should be deep, fertile, permeable, loose, a little humid, with good drainage and with good organic matter, it is also good that they have a pH that is semi-acid, ranging between 5.8 and 6.8

They are plants that can withstand the cold, although this will depend a lot on where the bush is located and the type of soil; the climates that are most difficult to resist are those that are extreme, such as the Nordic cold and the tropical heat; that’s why the best for this flower are temperate climates.

It is important to put a plant-type covering around the alstroemeria, this will be its protective layer in periods of strong heat or very cold, so that it does not suffer damage.

The cover should not rub against the plant because the latter could rot, ideally leave it five centimeters from the stem.

It is important to note the following: if the soil reaches a temperature that exceeds 22º centigrade, this plant will strive to be able to produce larger tuber roots and generate new ones, but this may cause them to start producing only stems and not flowers.

This plant likes to be in a vegetation type cover such as mulch to protect itself from the sun, or to be in the shade in the afternoon hours when it is very hot.

In other words, this plant will be well in the sun or in the semi-shade, but taking into account that alstroemerias do not like extremes, nor a very hot climate, nor a very cold climate.

They must be frequent but in a moderate way, because if you pour a lot of water their roots could rot.

If the plant is sown in a dry climate, it is important to keep the soil moist; without soaking it.

After sowing the seeds, it is important to water until the soil is moist and then be vigilant every day until you notice that the plant has surfaced; always keeping the soil moist but not wet.

Will only need organic compost and in its flowering some fertilizer that is of mineral origin. It will be very good if it is use every 20 days at the time it is in its flowering period and its vegetative growth.

You can apply a fertilizer that is slow release and do it according to the instructions on the label; This will be done in spring or at some time of plant growth.

If the alstroemerias were sown by means of seeds, they can be transplanted once they exceed or reach five centimeters in height; the soil should be loosened in the place where it will be planted, with a soil that has good drainage and with a depth of 30 centimeters, this will be done with a garden shovel and mixing with the compost at the same time.

You have to dig holes that are large so that the roots can adapt there without any problem, also leaving 30 centimeters between plants, then water until you see that the roots are wet.

When old stems are removed, it will be easier for the rhizome to develop new ones, thereby stimulating flowering.

It is common that their flowers are cut to put them in a vase for decoration; but if you’re going to do this remember this flower lasts long in the water.

This plant can be prone to some fungi such as cryptogamic disease and can also be attacked by some insects.

In general, it is a plant that is not very prone to diseases, but in summer it can be attacked by red spider mites or aphids, and most commonly, it gives them fungal diseases due to waterlogging of the substrate.

They may have certain problems with caterpillars, aphids, thrips, mites, whiteflies, snails, slugs, and nematodes; the most common of these pests are thrips and at the same time it is the most difficult to exterminate, they turn out to be more harmful even when the plant is blooming.

When the soil is very humid we can find diseases that occur due to root rot, these can be Rhizoctonia and Pythium, to avoid this it is important to water the new divisions with a fungicide and to do good sanitary procedures, so that these diseases are not a concern.

It can occur through the division of rhizomes, it should be during the autumn, but if you reside in a colder climate, it is better to do it in the springtime.

Although the most common is to do it through rhizomes, the simplest thing is to do it with the young, which sprout around; Another way is by dividing the bush in the spring, taking great care not to damage the roots; remember that they are very delicate.

Do not go ingesting alstroemeria, it is a toxic plant. Wear gloves when you go to manipulate the alstroemerias, to avoid in this way an irritation on the skin.