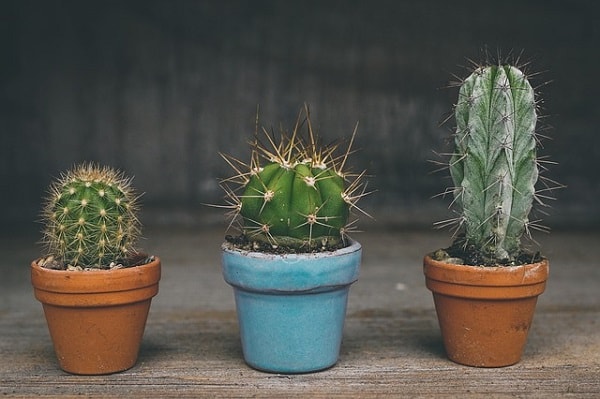 So you been asking yourself are cactus poisonous?

When it comes to decorating our home, one of the first things we think about is plants (just like this one), since they give our home an atmosphere of tranquility and peace, while purifying oxygen.

In spite of the fact that there is a great variety of plants, many times we go for those that have less maintenance, either because we travel a lot or because we forget to water the plants.

The first one you me think of is the cactus, since it is one of the plants that do not need so many cares.

Although whenever we think of cactus, we only imagine a tall plant full of thorns, the truth is that there is a wide variety of cactus; cactus with flowers, with thorns, edible, large, small, etc.

And because there is a great variety of this plant, it always jumps the doubt of which is better, if there is one that is dangerous or even poisonous.

For this reason I will explain in this article that although there are no poisonous cactus, but there are some cactus that are hallucinogenic and of which we must be careful.

The peyote is one of the best-known cactus and is originally from Mexico.

It is a spherical cactus with a greenish or bluish-green color and a beautiful flower.

It is low maintenance and slow-growing.

The peyote is not only known for its beautiful flowers, but also for the psychoactive alkaloids it produces, among which is mescaline, which is a hallucinogenic substance, whose consumption causes changes in perception, especially vision of unreal colors, and creates psychic dependence.

Although it is not usually fatal, high doses (20mg / kg or more) can lead a person to commit homicides or even commit suicide.

The San Pedro cactus is a plant with thorns, which can reach about 2 cm and some beautiful flowers, which will only be found at night and can measure up to 23 cm in length and with a slight aroma and are original Southern Ecuador and Northern Peru.

After the peyote, San Pedro is the one with the highest concentration of mescaline, which was used for recreational purposes, but also, as an entheogen, to facilitate psycho exploration.

Between one and four hours after ingesting this substance you can suffer one or several unpleasant side effects, such as nausea, vomiting, dizziness, sweating, palpitations, stomach pains, chest, neck and head, tremors and sensations of heat and cold, urgent need to urinate and malaise in general.

The Euphorbia Canariensis o Cardón Canario, it is a long-lived plant that can live more than 100 years, it is a perennial and succulent shrub, with the appearance of a cactus.

Cardon flowers are produced in spring and summer, with very unattractive little brown flowers that emerge along their edges.

This plant has a whitish and sticky latex, which if it comes in contact with the skin or mucous membranes can be poisonous, which inadequately handled, can cause sneezing and can burn the skin and can cause fainting and cold sweats if used as a purgative.

Euphorbias contain a white sap on their leaves that can irritate the skin.

While not all people react so intensely, the sap will generally cause a rash to appear anywhere in contact with the skin.

That is why it is recommended to wear gloves when handling Euphorbias to avoid contact of the skin with the sap. You should not ingest the sap or a plant of Euphorbia in general.

Is a plant native to Madagascar known as aranto or “Espinazo del Diablo”.

Despite being a very beautiful plant and its peculiarities, we must bear in mind that the Kalanchoe daigremontiana is a toxic plant.

So you have to keep it away from children and pets.

The toxicity of Kalanchoe compounds is caused by a toxin called bufadienolides, which are cardiac toxins and can cause vomiting, diarrhea, stupor, and coma.

Echinopsis lageniform or Achuma, also known as The Bolivian Torch, is a cactus that can be found in the Bolivian mountains and is one of the least known cactus that contains mescaline, that as we said before, mescaline is a substance with hallucinogenic properties.

The Bolivian Torch has been used as a psychoactive plant by the Indigenas in their shamanic ceremonies for a long period of time.

This cactus can grow to heights of 2-5m and reach diameters between 15-20cm and has thorns that are honey-colored to marron and is one of the cactus species that contains a high level of mescaline, containing a 0, 56% of the alkaloid in its dry form.

Echinopsis peruviana is a fast-growing shrub cactus, native to the western slopes of the Andes in Peru, and usually reaches a height of 3 to 6 m.

Its flowers are white and grow near the tip of the stem, which opens at night and has a strong fragrance.

This plant was used by natives in religious festivities for its psychoactive properties, due to a large number of alkaloids it has, especially mescaline.

Even though none of these cactus are not poisonous if it is true that you have to take some precaution when having this type of plants in our home, especially with our children and pets, since ingesting them can cause hallucinations and other symptoms.

But other than that if you make sure no one is going to eat them in, or if your planning to do it for some medical reason make sure not to do it in large quantities and verify which type of cactus with your personal Doctor.

So if you just want to have them in your home to help with your environment
you will be fine.

If this article helped please share, and thank you for reading.