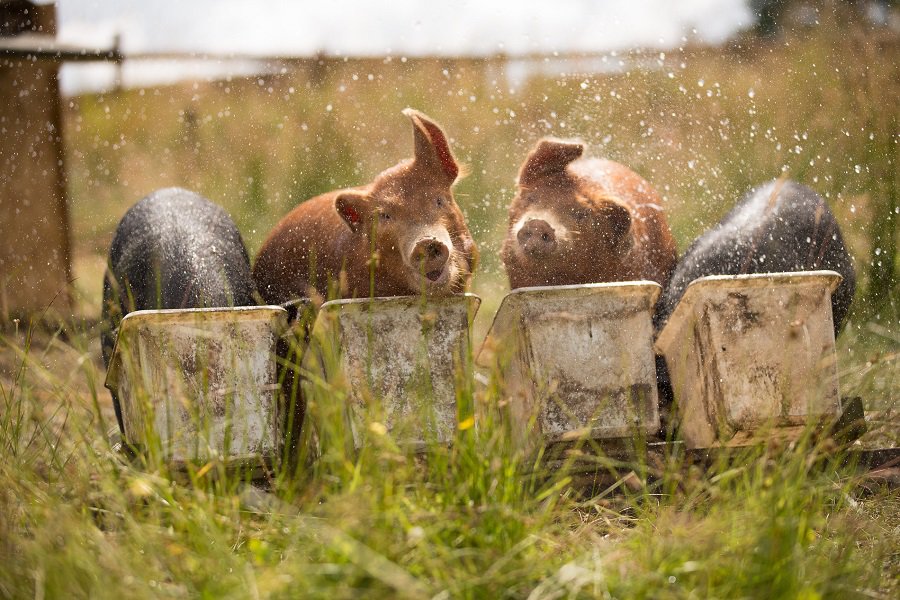 As you probably know by now, pigs are a jack of all trades when it comes to eating. If it’s up to them, they will eat almost anything, so in order to keep them healthy, we as pig owners are the ones who have to determine the type of food they can eat.

With this heavy responsibility comes many questions regarding pigs nutrition, one of them being.

Can pigs eat bacon? Yes, pigs love to eat bacon and other meat categories, but it is important to make sure the bacon is properly cooked as they shouldn’t eat raw meat; in doing so, you run the risk of your pigs acquiring diseases.

And don’t think they won’t eat it because it is raw bacon or raw meat, they will eat it, but the other problem with this is that they can acquire a taste for the raw, bloody meat and this could put in danger the other animals you might have in your farm or backyard. So raw meat is definitely a no-no for pigs.

Pigs can eat fish, earthworm, and even bird intestines as long as it\s cooked, and you can use whatever cooked method you prefer, but the meat must always pass through the heat.

So remember to avoid blood, raw meat, or rot food.

Does bacon have any nutritional value for pigs?

So you might wonder if they can eat the bacon. Is there any nutritional value and the answer is yes, there is.

Bancon can provide proteins, saturated fats, sodium, and overall a good amount of calories which can be good, especially if they lack some calories.

But this type of food should always be used as a treat or complementary to the pigs feed.

They shouldn’t eat bacon or meat on a daily basis.

The best food for pigs, especially farm pigs is eating their feed as the main source of food while mixing it up with other types of food like vegetables, fruits, etc.

Is it illegal to feed pigs bacon?

And it may be a surprise for some, especially those living here in the states, but, in some countries, it is illegal to feed meat to pigs which obviously includes bacon.

But not only that, it’s illegal to feed them scraps from your kitchen; a great example of this is Australia.

But regarding the United States, there are still regulations as a consequence of an outbreak of pig diseases that literally damaged the financial system back in the 50s, which most states apply.

That you should not feed garbage to your pigs, but what is garbage, and under what circumstance does it apply to you?

Well, you can define garbage as uncooked, rotted, not healthy, leftover foods.

But some states like Missouri will allow it as long as the pig is being fed for your own consumption and the garbage is from your kitchen, and you must also have a license from the state in order to do so.

So the best thing to do is to provide fresh and healthy food to your pigs and if you are feeding meat to make sure it’s properly cooked.

How to feed bacon to pigs?

The best and most simple way of doing so is by using it as an occasional treat; you can give it to them directly or mixing it up with their favorite type of food.

But do remember it should always be cooked bacon or meat.

Can pigs eat pork? or other pigs

That’s a great question; yes, they can definitely eat pork and other pigs. That’s why it’s essential not to give them raw meat as we dont want to see a situation in which the big pigs eat the newborns. This could happen if they’ve acquired a taste for it.

Feeding them raw meat will not only put in danger the life of your piggies but also any other type of animal on the farm.

Sure, this is not a common behavior but lest not test their abilities. Remember pigs can and will eat anything under the right circumstances.

Pigs are omnivorous animals, so they can definitely eat bacon and other types of meat as long as it is properly cooked. In not doing so your pigs might develop a taste for raw meat, and these might put the other animals in the farms in danger.

As you probably know, there are many stories of pigs eating chickens and other types of small animals. This is the consequence of them developing a taste for the bloody meat.

Not to mention that eating raw or rotted meat is completely unhealthy for you pigs and could put them in danger by acquiring a contagious disease.

So the best thing to do is provide a healthy, balanced diet with pig feed and healthy greens. And sure, every other time, you can give them some bacon as a treat.