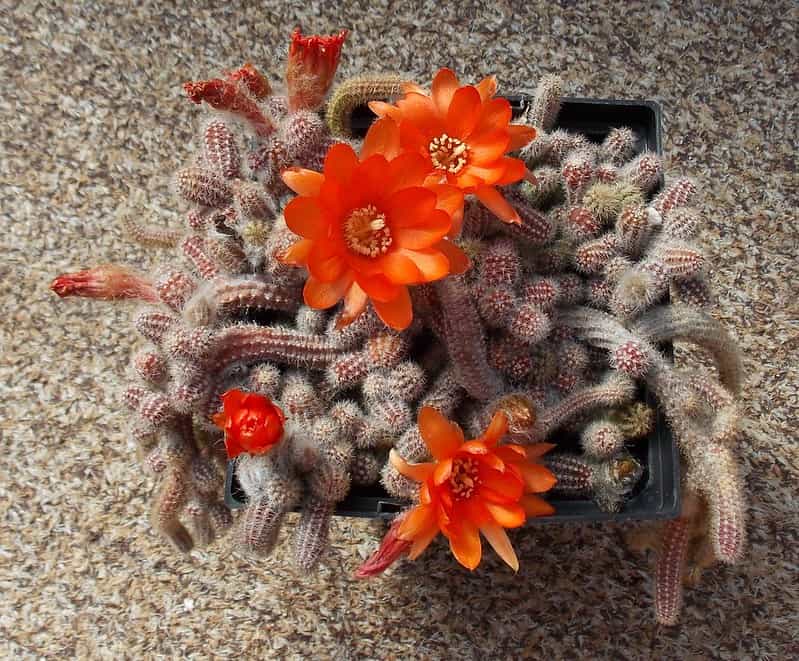 Echinopsis chamaecereus is a small, intense cactus with beautiful flowers that receives the popular name of Cactus Cache.

The distribution and habitat of Echinopsis chamaecereus are in the mountainous areas of Argentina.

It is a cactus tapestry with many stems. The habitat is at elevations of more than 1200 m.

Established plants can reach a height of 15 cm and a width of 30 cm, with stems.

They produce red, orange, or yellow flowers that last only one day but emerge for 2-3 weeks. They can flower in spring and later in summer.

They are used in rockeries, pots, and planters to cover low maintenance areas of the garden.

In early summer, scarlet flowers are produced from the areolas, approximately 2.5 cm wide.

The individual flowers last for about a day, but the flowering period lasts for two to three weeks.

Echinopsis chamaecereus is an easy cactus to grow, as it does not require special care.

During the active rest period, watering should be moderate enough to completely moisten the potting mix, but allow the top centimeter of the substrate to dry between waterings.

During the rest period, water with limited amounts of water, depending on the temperature.

Echinopsis chamaecereus should be watered deeply every 15 days in summer and during spring.

In winter, it is necessary to force this plant to rest; therefore, the plant should not be watered at all.

Avoid over-watering these plants, always leaving them to dry for a few days between waterings.

During cold temperatures, usually below 5°C/41°F, it’s best not to water the plant.

If kept in a warmer room, you will need enough water to prevent the soil from drying out completely.

I recommend you fertilize at the beginning of the growth period, apply a slow-release fertilizer.

The fertilizer should be sporadic and based on a low nitrogen fertilizer rich in potassium and phosphorous.

You can also use a specific liquid fertilizer for cacti and succulents.

Echinopsis chamaecereus does not form seed. The best way to propagate this succulent is through cuttings.

Remove a branch from the main stem; it can be easily separated and put it in a 5 to 8 cm pot, with the substrate from where it grew.

Lay the cut horizontally on the surface of the potting mix.

In good condition, new growth will occur soon, and young plants are likely to be ready to flower the following summer.

While handling the plant, some small shoots often separate from the main stem.

Unlike other succulents, the Echainopsis chamaecereus does not need the cuttings to dry for a few days before being planted.

The branch attachment points are so narrow that there is little risk of rot on the cutting surface.

They do not need pruning of any kind.

The transplant should be done at least every 2 years in a wide and deep pot than the previous one.

The main pest that affects Echinopsis chamaecereus is the cottony mealybug and the mealybug.

It is a cactus very sensitive to attack on the roots by cottony mealybugs.

The treatment against the cottony mealybug will be:

1-Remove all the soil and destroy it.

2-Wash the roots well with a cloth or milkweed soaking in alcohol and then clean them with water.

3-In more serious cases, immersing the entire plant in a suitable liquefied insecticide.

It’s best if you let the roots dry after treatment and before replanting, in completely sterilized or new soil.

Always clean and sterilize tools, and all other items used when replanting.

Apply regularly, weekly for several weeks, a watered insecticide to the substrate.

Another option is to immerse the pot, up to the top of the soil, in a bucket of liquefied insecticide solution, although this is more radical.

You should bear in mind that temperatures below 2ºC/32°F are not convenient for this succulent.

This is a really beautiful cactus that anyone can have in their home, even those who are inexperienced in cactus planting and care.