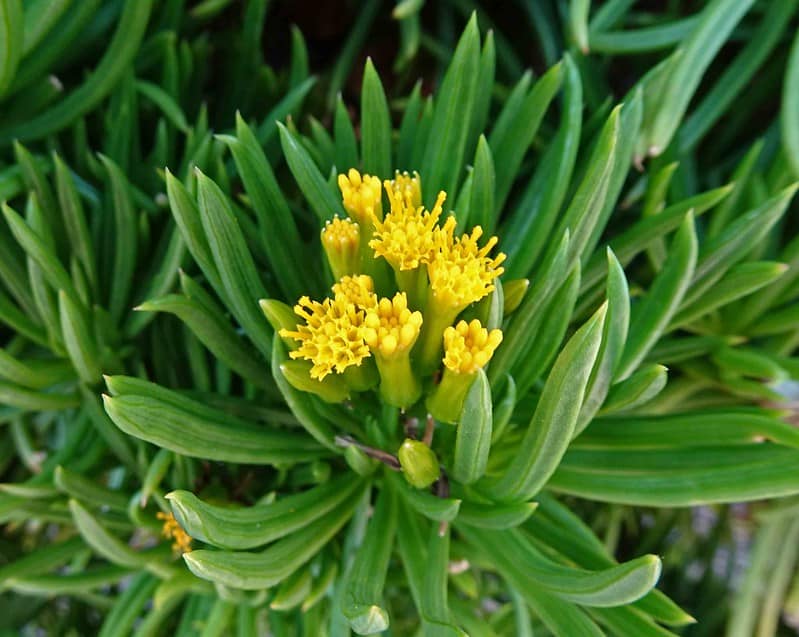 Senecio barbertonicus “Succulent Bush Senecio” is the perfect succulent for adding variety and texture to your container gardens and arrangements.

Because this “Succulent Bush” grows so tall, it can get heavy and could topple over.

If it begins to flop, behead the top until the stem is firm again.

You can then propagate the cuttings.

In the Asteraceae family we find the genus Senecio composed of about1600 species of plants distributed by almost all continents, especially

It receives the vulgar name of Senecio de Barberton.

This species is native to South Africa.

Its fleshy cylindrical leaves are finger-shaped, end in a pointed, light or dark green color and have 3 to 4 longitudinal nerves.

They bloom in winter.

They are used for rockery, dry and sunny slopes, to form shrubs or in pots and planters.

Senecio de Barberton can thrive in a full sun exposure although they prefer a light shade. They can withstand some weak frost of up to about -4 ° C.

Although they can live in poor and sandy soils, they will appreciate a well-drained soil with some organic matter.

The transplant will be done in autumn.

Tips to take care of the Senecio Barbertonicus

If you sow your Senecio barbertonicus in a pot, it is advisable to mix 50% black peat with 50% perlite or similar (pomice, akadama, previously washed river sand), since, this plant is very sensitive to excess watering.

And so in this way, you will make sure that the excess water comes out quickly, thus preventing the roots from rotting.

If you plant the Senecio barbertonicus in the soil, you should know that it grows in soils with very good drainage.

If the substrate of your garden or patio is very compact, do not worry, you just have to make a planting hole of about 50cm x 50cm, then cover it with shading mesh and fill it with the mixture of substrates that I mentioned before and last, you just have to plant.

You can water the Senecio barbertonicus 2 or 3 times a week during the warmest and driest season of the year, and every 10 or 15 days the rest of the year.

During the winter, and especially if frosts occur in your area, you should water the plant at least once or twice a month or every 35 days.

Do not spray the plant, because the water on its leaves or balls can clog the pores of the plant, preventing it from breathing.

During spring-summer, the plant to grow needs more water than when it is at rest, son in this case you can use it there is no risk.

The importance of the water applies to the fertilizer the Senecio barbertonicus will have a good development,if you add the fertilizer in spring and summer, with fertilizers for cacti and other succulents, following the indications specified on the product package.

If the plant is in a pot, add a liquid fertilizer so that the drainage is still good.

Senecio Rowleyanus can be propagated by seeds and by cuttings in spring.

Third step: water the seeds, but this time with a sprayer.

If all goes well, they will germinate in 2-3 weeks.

Multiplying it by cuttings is much simpler than propagation by seed.

Just cut a piece of stem, then let the wound dry one or two days, and finally plant the cuttings in a pot with black peat mixed with pearlite in equal parts.

It can withstand higher temperatures without problems but better not be below 3-6ºC.

Growing fast it may be that Senecio barbertonicus needs to be pruned, and if so, you can prune it in late winter.