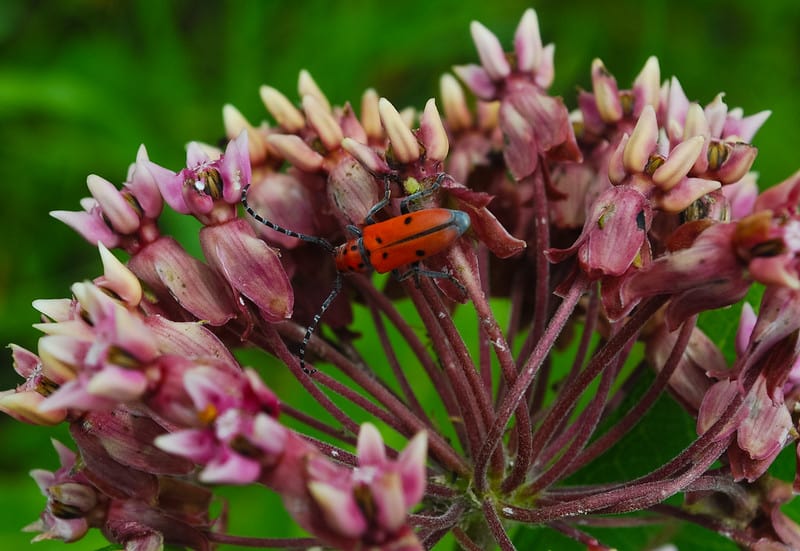 The Asclepias Syriaca Flower is a perennial herbaceous plant, originally from North America, which is part of the Apocynaceae family, receives the popular name of Common Milkweed. And if we talk about the high, it usually measures between a meter and a meter and a half and about forty or sixty centimeters in diameter.

Its a beautiful plant and in this article we talk about it.

How to care for the Asclepias Syriaca Flower (Common Milkweed)

Spreads via rhizomes and forms small to large clones. Rhizomes can be cut and transplanted early in the spring.

Is this plant edible: According to the Field Guide to Medicinal Wild Plants or Edible Wild Plants, the Asclepias Syriaca Flower is edible only under certain circumstances. Boiling can eliminate the bitter taste and toxicity of the sap, but this must be done very carefully to avoid the toxins. Eating milkweed is not recommended.

Other Use: Native Americans used this species as a source of fibers and during the Second World War children in the northern states were encouraged to collect the seed pods that were processed for the coma, or floss, which was used for floatation in life vests. Today the coma is harvested for use in pillows and comforters.

They are used as ornamentals in gardens for the beauty of their flowers that attract many butterflies that feed on the nectar and deposit their eggs there, which transform into caterpillars; although in turn the plant repels other insects and herbivorous animals.

It has a deep fleshy white pivoting root that once established is very resistant.

The aerial part is formed by highly branched erect stems that exude a toxic latex when cut.

It has lanceolate green leaves that are eight to fifteen centimeters long and are distributed in an opposite way.

It blooms during the summer. It produces small scented flowers, with five colored petals ranging from light pink to purple, gathered in terminal umbel-like inflorescences, which are used as cut flowers thanks to their long duration.

After pollination, a green fruit or pod is formed, which turns brown and dehiscent when ripe, about twelve centimeters in length; it contains dark and flat seed seeds attached to silky and elongated white filaments (from which it takes the popular name) that allows them to be dispersed by the wind.

Within its natural habitat, we find it in humid and even waterlogged terrain, since its roots are adapted for it, so the obligations relative to medium to abundantly. It prefers problems in full sun and does not require much maintenance.

No serious insect or disease problems. Somewhat weedy and can spread.

Stems and leaves exude a milky sap when cut or bruised. Flowers give way to prominent, warty seed pods (2-4″ long) which split open when ripe releasing their numerous silky-tailed seeds for dispersal by the wind.

Seed pods are valued in dried flower arrangements. Flowers are a nectar source for many butterflies and leaves are a food source for monarch butterfly larvae (caterpillars).