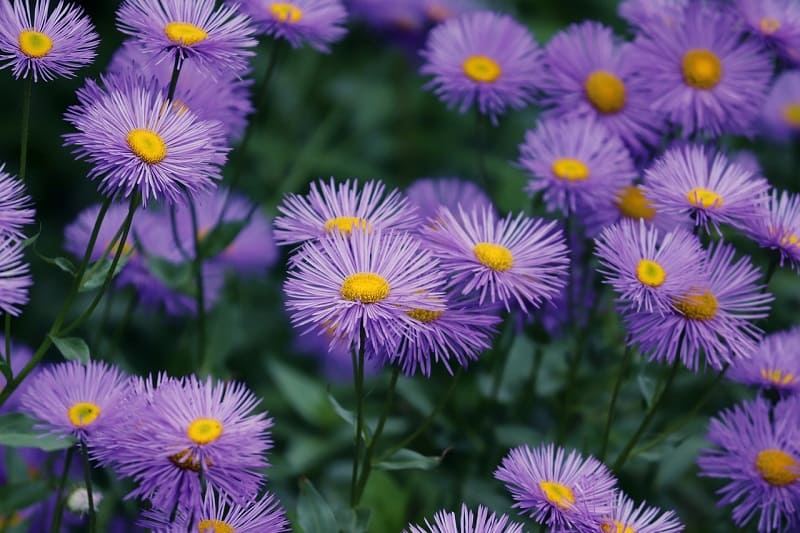 Aster Flower is a very broad genus of herbs, 2,338 species have been described, and only 214 have been accepted, that number is high enough so that we all have the possibility of enjoying at least one specimen throughout our lives.

In addition, they live in temperate regions around the world, which makes them easily adaptable to different conditions.

With alternate and greenish leaves, they produce white, lilac, or pink flowers in chapters, and they are solitary and terminal or corymbose.

It normally sprouts in spring, but can also do so in fall if conditions are right. The fruit is a fusiform achene.

Its growth rate is quite fast depending on the species, being able to reach 30cm in just a few months.

The most popular species are:

Aster alpinus: known as an alpine aster. It is a lively plant native to the middle altitudes of the Alps.

It grows between 25 and 35cm in height and produces bluish-violet flowers in summer.

It is perennial and reaches a height of between 40 and 60cm, with blue-violet flowers in summer.

Aster squamatus: it is a herbaceous plant native to South America that reaches a height of 2m. It produces white flowers in summer.

Tripolium is a short-lived annual or perennial plant native to northern Europe that grows between 20 and 60cm in height.

It blooms for much of the year, until last summer, and its flowers are blue or white.

How to care for the Aster Flower

If you want a beautiful Aster Flowers we recommend that you provide the following care:

Asters must be outdoors, either in full sun or in an area where they receive a minimum of 3 hours of direct light.

The more shade they have, the poorer their growth will be and the fewer flowers they will produce.

Since they are relatively small plants, they can be grown both in pots and in the garden, and the soil can be somewhat different depending on where they are kept:

Garden: it must be fertile, with very good drainage. Ideally, the pH should be somewhat acidic, between 5 and 6.5, but they do not have problems with clays as long as they absorb water quickly.

Pot: I advise putting the first layer of cheek, akadama or similar and then fill with universal growing media mixed with 30% perlite.

The frequency of watering for these plants will vary greatly throughout the year. Keep in mind they do not resist drought, but if you pour more water than they need the reask is losing them. And, this often happens. So is important to have a valance.

So to avoid the death of the Aster Flower, in addition to using a good substrate or planting them in suitable soils, it is very important to water when necessary, neither more nor less.

And for this, it is highly advisable to check the humidity of the soil before watering them, either by introducing a thin wooden stick or a digital humidity meter.

If we have them in a pot, what we can do is weigh it once, watered and weigh it again, dry soil weighs less than wet and, this difference in weight will be of great help to us when to water.

If they are in a container, liquid or granular fertilizers must be used, following the instructions specified on the product package.

Aster Flower multiply by seed the vast majority of the time, or by division in spring.

Let’s see how to proceed in each case:

The first thing to do is fill a seed tray with universal growing medium.

After, a maximum of two seeds are poured into each socket and covered with vermiculite.

Finally, it is watered again, this time with a sprayer, and the seed tray is placed outside in the full sun.

To divide the plants it is necessary to extract them from the soil or pot, and with a serrated knife previously disinfected with alcohol, divide the root ball / earthen pan.

Then it will only be necessary to plant each piece in different areas of the garden or containers.

In spring. If it is kept in a container, transplant every two or three years.

It depends on the species. Some do not resist the cold at all and are annual, but there are others such as Aster alpinus that do endure frosts of up to -18ºC.