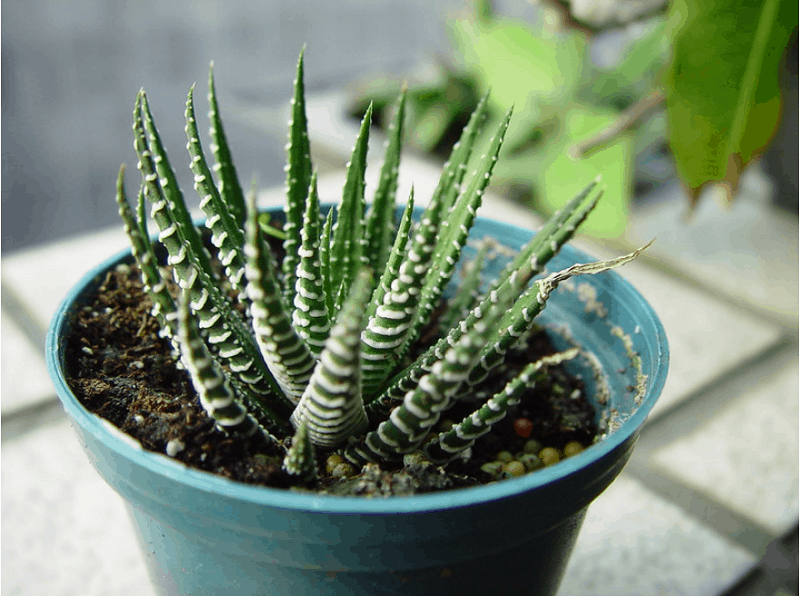 Haworthia Fasciata “Zebra Plant” is a species of succulent plant belonging to the Xanthorrhoeaceae family, endemic to South Africa.

Its leaves are triangular in shape, green and with narrow stripes or white-crested strips on the outside.

The flowers, white, arise in October to November, at the end of an inflorescence.

At maturity, you get to create numerous rosettes grouped very close together, small and all of them with many and tight leaves.

Normally, the Haworthia Fasciata “Zebra Plant”they are usually grown in gardens, however, they are also grown in greenhouses and homes.

It is a very suitable plant, for gardens with rockery.

Haworthia is not considered a difficult houseplant to grow—if you can keep a pot of aloe alive on a windowsill, chances are you can do the same with Haworthia. As with all succulents, the most dangerous situation is too much water, since they should never be allowed to sit in water under any circumstances.

Have no fear: These zebras don’t reach anywhere near the size of genuine equids.

The plant grows in a clumping fashion, sticking to about 4 inches high and up to a foot wide.

During summertime, the largest rosettes send up a single flower stalk that will soon be graced with tiny tubular white blooms.

Haworthias are winter growers and are dormant in the hottest summer months.

Those species with red veining or chocolate faces will exhibit superior color in bright light.

All forms that are green, especially included the variegated forms, will prefer filtered light. Water thoroughly when soil is dry to the touch.

How to care for Haworthia fasciata “Zebra Plant” 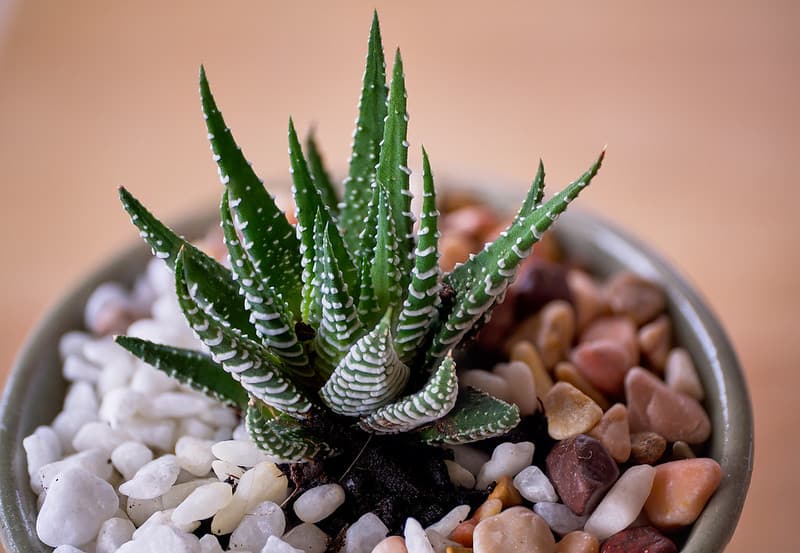 Haworthia fasciata looks great in terrariums and modern cement pots. You can use it to add texture to an array, or you can use it as a focal point.

Haworthias fasciata, requires a substrate that is rich in organic matter and sand to facilitate drainage.

They are succulent plants with high nutritional needs.

The substrate or arable land should be a mixture for cacti, which drains well and with sufficient aeration to small and compact roots.

If you make your mix of soil or substrates, use part of the cactus substrate, part of perlite and part of sand.

The zebra plant growing season, from April to September, is when it should be water completely and then water, only when the earth is dry to the touch, although not completely dry.

In spring and summer the irrigation should be moderate and almost nil the rest of the year.

When you do not know at what time to water the plant, you should only wait for the substrate to be completely dry between irrigation and irrigation to avoid excess irrigation and the roots of the plant rot.

Haworthia fasciata resists low temperatures if you have dry soil.

Winter is the worst time for Haworthia fasciata.

Irrigation, along with cold temperatures and air currents, can make the plant sick or even kill.

As is common with many other succulent plants humidity is not important. However, they do like good ventilation so avoid very tight “airless” corners of your home.

The ideal time to pay for the Haworthia fasciata is from April to September.

A diluted liquid fertilizer can be incorporated into the irrigation water, once a month.

You can also fertilize the plant with worm humus once or twice a year. Never use high nitrogen fertilizers when fertilizing your succulents.

Haworthia fasciata is multiplied by separation of rosettes or buds from the mother plant, which it produces in large quantities.

They can be spread with about 5 cm of trimmed leaves, allowing the wound to heal, for at least a couple of days before planting.

They also produce buds or young shoots, which can be picked up (carefully) from the mother plant and replanted.

In both methods, you must water the substrate once and then wait to see a small sign of new growth, avoiding excess water.

These plants are compact but when treated correctly they do produce offsets quite easily.

This means the plant will spread and grow into a clump, so one solo plant at the start will quickly become many which in turn will eventually fill a pot to add some impressive visual appeal.

You can let the clump continue to grow and spread within the existing container, or separate them for even more plants.

Haworthia are small (usually remaining between 3 inches and 5 inches in height) and relatively slow-growing. They are often grown in small clusters in wide, shallow dishes. Over time, clusters will naturally enlarge as the mother plant sends off small plantlets.

When the cluster has outgrown its container, repot in the spring or early summer into a new wide and shallow container with fresh potting soil. This is also the time to take offsets for propagation.

It’s rare for any Haworthia to outgrow its pot quickly, therefore repotting is only usually required infrequently and normally only when offsets have filled the pot. Sometimes the clump works itself free, becomes unstable and starts falling out of the container so you’ll have to repot to get it stable again.

If you do find yourself needing to repot your plant, use a similar soil composition to what was being used previously. Normally this will be standard houseplant or cactus compost with grit or perlite added to aid in drainage.

If you divide the plant and remove a number of the offsets to reduce the overall size of the clump you can probably just reuse the existing pot / container. If not, just choose a pot slightly bigger than the last.

Haworthia fasciata must remain in a place where it can receive a lot of sun or bright light.

The areas of the home facing south-southeast will give you the most sun.

An east or west orientation will give the part of the direct sun of the day, more appropriate.

If placed in full sun, they can acquire reddish or orange hue and grow more slowly.

Too much sun can dry the tips of the leaves, a symptom that they should put the plant in semi-shade, so that its leaves do not burn.

Haworthia species like bright light, but not direct sunlight. These grow in similar conditions to other succulents. In their native environment, they are often found in the shade of a rock or other object.

They do best in a room with a window facing east or west to provide bright light for a few hours a day. White or yellow leaves usually signify too much sun. If the plant isn’t getting enough light, its green color will fade. If you move your indoor Haworthia outdoors for the warmer months, ease the plant into more and more direct light per day or, like a human, it may get a sunburn. 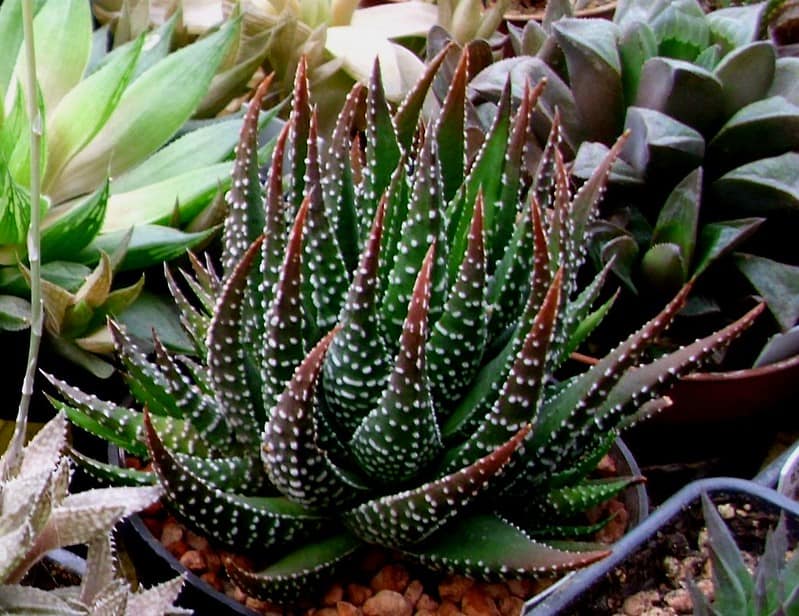 There are about 80 species of Haworthia, but their classification can be complex. The main difference between the common species is the size of the leaves and the orientation of the white markings on the leaves. In general, the best advice is to buy the most attractive variety based on leaf form and markings, as they all have similar cultural requirements. Look for these:

Flowers of the zebra plant

Yes, this is a flowering houseplant. The flowers will normally appear in Summer months on the end of a long stem (inflorescence) if they’ve been treated well during the year. If you want to see what they look like, be sure to check out our readers’ photos in the comments section further below.

How to distinguish the Haworthia fasciata from the attenuata?

Fasciata and attenuata, are very similar species, therefore, the two are often confused with each other.

The main difference between the two species is that Haworthia fasciata, has the innermost side of the leaves smoother unlike Haworthia attenuata, which shows tubers, which are warty growths, along the leaf.

Haworthia fasciata is supposedly harder to find than the Haworthia attenuata variety and seems to have thicker leaves.

Botanically referred to as Haworthia Fasciata, this fascinating succulent hails from the family Asphodeloideae, and Haworthia as the Genus.

The genus Haworthia is named in honor of Adrian Hardy Haworth, who was an entomologist and a botanist. (How cool is it to have a plant named after you!)

With about 80 species under its belt, Haworthia is one genus that offers a wide variety of succulents for one to explore.

It’s like the Zebra plant name is given to anything that has white stripes on it and thus, the name Zebra plant can be quite misleading.

Two other plants (that are not succulents) are also referred to as Zebra plants.

These include Aphelandra squarrosa and Calathea zebrine. However, nothing can come close to the glamour exuded by our Zebra Haworthia.

As well as all the other positive traits about the Haworthia, another bonus is that it’s not poisonous to people, cats or dogs.

If you notice browning leaves at the tips, that’s likely an underwatering or sunburn issue. Oftentimes these two problems coincide, as underwatering makes the plant more prone to drying out at the tips in intense heat. Fix by giving your plant a good soak and potentially relocated to an area with some protection from the hottest parts of the day.

If you see mushy, drooping leaves and stunted growth, it’s likely you’ve overwatered the plant. Either your watering habits or the soil mix is the issue here – figure out which you’ve got wrong and correct it!

You’re not likely to find many pest issues with this plant, but mealybugs and other types of scale insects can crop up. You can use pesticides and insecticidal soaps to get rid of them, or wipe your leaves with rubbing alcohol-soaked cotton swabs.

You won’t see many diseases with zebra haworthia — just the ones caused by overwatering.

Q. How often do haworthias need to be watered?

In general, you should wait until your soil is completely dry, then water deeply. This ends up working out to about once every 3 weeks in summer, and once every month or two in winter.

Q. My haworthia is turning red…why?

This is a typical response by the plant to being exposed to a lot of light. It’s not a bad thing, just a different appearance that some growers prefer!

Q. Will my haworthia bloom?

Haworthia does bloom, but as it’s a slow grower it can take a bit of time to show up, and won’t happen unless growing conditions are right – so follow this guide!

If you’re looking for a striking but simple plant that’s perfect for an office desk, kitchen, or succulent planter, look no further than Haworthia attenuata, or the zebra plant. It can thrive in pots, in the ground, and even indoors in a decorative arrangement so long as you care for it well.

The striking, green and white appearance is why they’re so popular. It’s how they got on my radar — I saw one at the nursery and instantly bought it!

The Zebra plant is a low growing succulent reaching to a height of between 4-8 inches. This heavily suckering plant forms proliferating rosettes arising from the base.

Haworthia fasciata is generally a slow-growing succulent that can last a lifetime. This dainty succulent is clump forming and thus it can fit well with other succulents in the same container.

This South African succulent stands out for its erect, multifarious leaves having streaks of white tubercles on the green outer surface which gives it the Zebra effect.

When stressed (mainly due to long hours in the hot sun), the tip of the leaves may turn red.

Haworthia fasciata has a miniature leafy stem which appears to be almost invisible.

Due to its slow growing nature, the Zebra Haworthia rarely blooms especially when planted indoors. When it does, blooms appear in summer characterized by tiny, tubular pink or white flowers on an inflorescence (a thin tall stem).