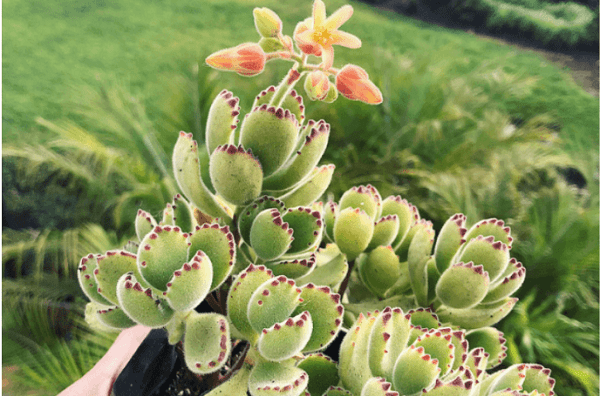 One of the most beautiful and rare plants we can find is the bear paw succulent.

Or as other formal name Cotyledon Tomentosa

The Bear Paw succulent is a small succulent plant belonging to the Crassulaceae family.

It is native to South Africa, but thanks to its appeal, it is cultivated in much of the world.

The Cotyledon Tomentosa  succulent is grown mainly in pots since it fails to reach large dimensions and has fairly slow growth.

This succulent is a species that is characterized by developing branched cylindrical stems that fail to exceed 20 cm in height.

The shape of the leaves is rounded to spatulated with the entire lateral margins and the end clearly jagged.

The dentition of the margin in combination with the shape of the leaf closely resembles the claw of a bear.

All the leaves have a very attractive light green coloration.

Both the leaves and the stems have the surface covered by a layer of small whitish filaments, which makes the leaves soft to the touch.

The flowers are small, but they provide extra ornamental value to the plant.

They are arranged in small inflorescences that originate from the apex of the stems.

They all have a flared shape with orange-reddish petals. They bloom from mid-spring to almost late summer.

This succulent is often used for potting, but they are suitable for rockery, slopes and cactus succulent gardens.

They can also be used as houseplants but located in a place with good ventilation.

The bear paw succulent prefers direct sun exposure during the cooler seasons of the year.

But in summer it is recommended to give the plant a little shade during the hottest hours of the day.

But if it is grown indoors, it must be in well-lit rooms.

The bear paw succulent withstands moisture very well, this makes it ideal for the Caribbean.

The bear paw succulent is a plant that develops best in warm climates with very mild winters.

Its optimum temperature range is between 20ºC-28ºC. Do not expose to temperatures below 7ºC.

The substrate must be used for optimal water drainage to avoid future rot.

A mixture of 75% cactus substrate and 25% coarse sand can be used.

The bear paw succulent should be watered regularly in spring and summer, always waiting for the soil to dry, before doing the next watering.

When autumn arrives, the risks must be reduced until they are eliminated from the second half of autumn until the end of winter to avoid rot and fungal attacks.

You may like: Mother of Thousands vs Mother of Millions

The bear paw succulent, like most members of the Crassulaceae family, has succulent leaves that are a great attraction for pests, especially cochineal.

Due to the silver hair of its leaves, it is easy to miss the first signs of these pests.

The bear paw succulent is mainly affected by mealybugs that are housed at the base of the leaves and stems.

Remove them quickly because they cause the leaves to fall and the proliferation of pathogenic fungi.

The bear paw succulent can be propagated by leaves.

Detach a leaf from the mother plant and let the wound heal for a week.

Then place it on a cactus and succulent substrate. You will see how in a month it already has roots.

It can also be propagated by cutting and seed.

If the propagation by cutting allows the wound to heal a week or two before sowing.

When The bear paw succulent is planted in a pot, the transplant should be done every 2-3 years in spring to a container a size larger than the plant.

You can add a fertilizer based on mineral fertilizer for cacti and succulents once a month during spring and summer to help the plant grow better.

You can also add fertilizer of worm humus, super thrive or fish emulsion.

If you use liquid fertilizer do it in the spring and summer months.

Use half the recommended dose and remember to water your plant before fertilizing it.

This plant does not usually need to be pruned, but it is advisable to eliminate dried or damaged leaves and branches so that they do not contaminate the other leaves and so the plant will also look prettier.

Is this succulent toxic?

The answer is yes.

All parts of The bear paw succulent are poisonous, but only if ingested.

That’s why you have to be careful with pets.

Why do the leaves fall on my bear paw succulent plant?

It can be for several reasons.

The most common with bear paw succulent is excess watering or lack of lighting.

If your plant looks stretched, place it in an area where it receives greater clarity.

On the other hand, if you water it too often or with too much water, its leaves will become very heavy and fall.