Mother of Thousands vs Mother of Millions these two plants bring confusion due to their similitudes.

The only thing that brings differences between them is the shapes of their leaves.

The leaves of the mother of thousands grow in pairs and wide with plantlets, which are small clones, produced on the leaf margin.

The mother of millions has narrow leaves, and you can see the plantlets on the leaves’ tips.

Here I tell you more details about his beautiful succulents. 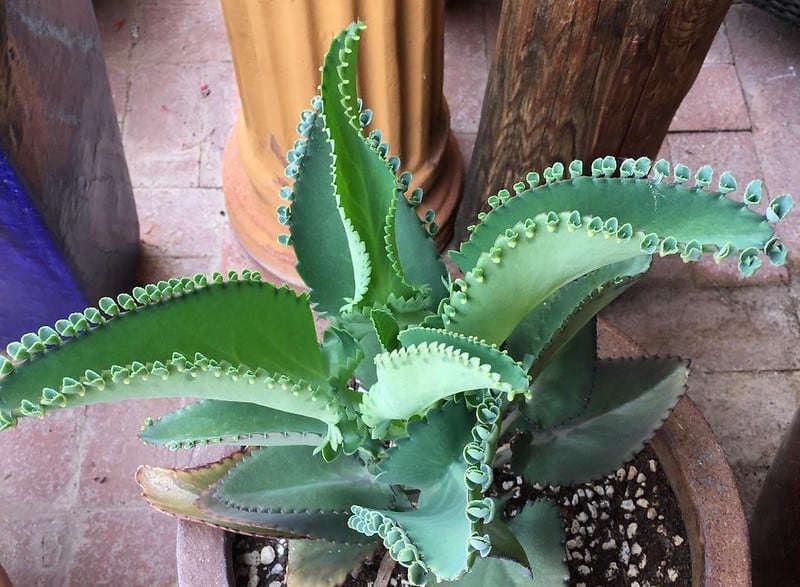 The mother of thousands is a beautiful house plant excellent for beginners.

One of the most interesting futures of this plant is the baby plantlets that appear on the top of the leaf, and yes, this plant can bloom, but it rarely happens if it’s indoors.

When the mother of thousands of blooms, the mother plant dies but is replace by the plantlets.

And this is one of the reasons many succulent gardeners grow this plant is a container.

This succulent comes from the Crassulaceae family.

This plant is usually confused with the chandelier succulent plant because of the similar growth conditions.

The mother of thousands can’t produce seeds; the only way to multiply this succulent is from plantlets.

This beautiful succulent can resist drought times and can adapt quite easily.

The mother of thousand does not need too much fertilization. You can fertilize once every few months.

The stems are cylindrical, smooth and exhibit a very conspicuous gray-green color.

The leaves are arranged opposite, are petiolated, fleshy and have a very striking triangular shape (mainly lanceolate) with serrated margins and the base folded up.

In addition, they are folded in the central midline forming a V and show a gray-green coloration with more abundant violet spots towards the margins on the underside.

At the base of each tooth of the margin, seedlings develop as a method of asexual reproduction. Each sheet can exceed 15 cm long and 5 cm wide. 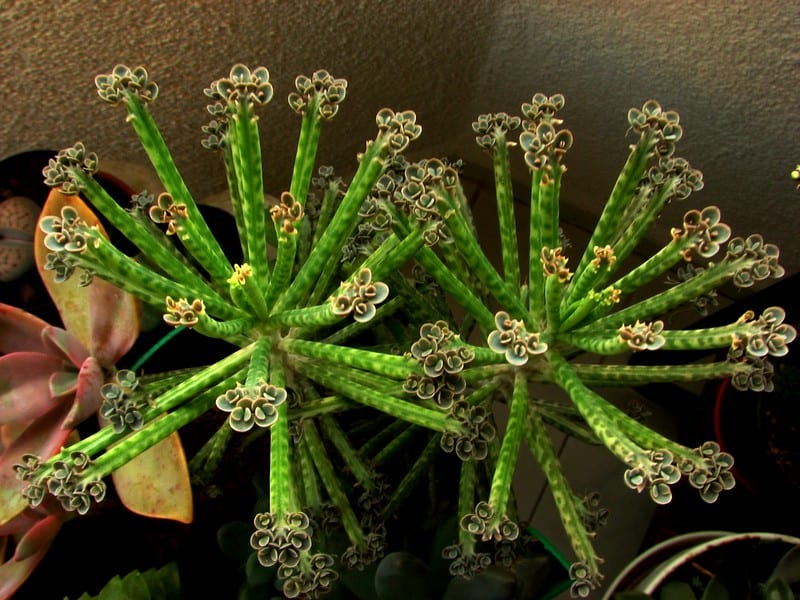 These succulent species originate in Mozambique and Madagascar, growing in different types of habitats.

It has beautiful green-gray leaves that are defined by a dark purple.

Showin off many plantlets along its leaves.

These succulent plant blooms during winter, producing seeds and showing off its red flower.

But make a note, this succulent will not survive winter, so make sure it is indoors close to a sunny window.

These succulents need to have great drainage; this will ensure the plant doesn’t rot.

Use a container with great drainage holes with a great cactus soil with 50% to 70% mineral grit.

Care of the Mother of Thousands vs Mother of Millions

These succulents are the easiest to to grow, becoming a nuisance in collections around the world for its invasive power.

Next, your essential care:

This plant requires a sunny exposure throughout the day to achieve optimal growth.

In conditions of poor light, the stems will etiolate quickly, and the plant will weaken.

It prefers a cool to warm climate throughout the year.

The ideal temperature range is between 20ºC-28ºC. It does not tolerate long hours of temperatures below 5ºC or contact with snow.

It adapts to almost any type of substrate provided that it allows rapid drainage of irrigation water.

Sometimes it can grow between cracks in buildings or roofs where the substrate is almost 100% mineral.

Therefore, it is a plant capable of invading almost any place in the garden.

Quite tolerant to drought, although it appreciates periodic irrigation during the hottest seasons of the year.

Prevent water from accumulating on the leaves when watering to avoid future fungal attacks.

Extremely resistant to pests being rarely found in this species.

It is only susceptible to mealybugs if it is maintained in prolonged stress due to poor cultivation conditions.

Some mollusks can devour sections of stems and leaves.

Extremely simple by little children that develop in the margin of the leaves.

Also from cuttings of stems or even leaves. The multiplication must be controlled to avoid annoying invasions in other pots.

The flowers are grouped numerous into branched terminal inflorescences that hold floral umbels.

Each flower has a very conspicuous tubular shape with 4 petals arranged at 90⁰ with respect to the others.

All flowers can exceed 3 cm long and always remain arranged down.

Flowering is accompanied by an apical lengthening of +/- 30 cm from the central stem.

Although many online media place this plant as a relic in the medical sector, it should be borne in mind that the same substances that have medicinal benefits are very dangerous in high doses.

The consumption of this species for therapeutic purposes should be carried out with control to avoid damage to health.

As a recommendation, you should always go to the doctor to be assigned the optimal dose.

Are they invasive or harmless?

I have heard about these plants to know that they are considered invasive weeds by many.

In fact, both plants, Mother of Thousands and Mother of Millions, are considered invasive in a lot of areas.

I heard that these plants need to be kept away from other plants because they grow rapidly and aggressively.

They can quickly take over an area and stifle the growth of other plants surrounding it.

In fact, I have heard of people being so sick of this plant that they want to eradicate them completely from their garden, but they are just so hard to get rid of. The plantlets that grow out of the leaves can grow anywhere they land.

Conclusion: What is the difference between Mother of Thousands vs Mother of Millions?

These succulents are quite different but with similar looks since their from the same Crassulaceae family.

Many considered this succulent plant as a toxic weed, but if you grow it with the proper care and caution, you won’t experience any issues.

The basic difference between these two is:

The leaves of the mother of thousands grow in pairs and wide with plantlets, which are small clones, produced on the leaf margin.

The mother of millions has narrow leaves, and you can see the plantlets on the leaves’ tips.