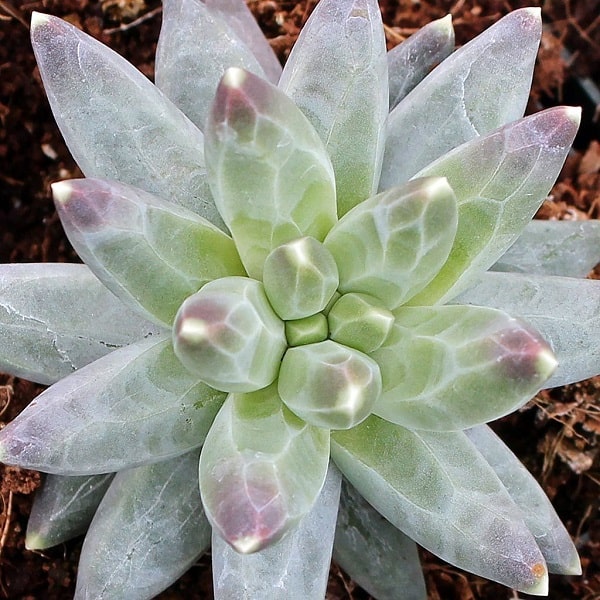 The little jewel succulent or the Pachyphytum Compactum is a herbaceous species of the Crassulaceae family and is native to Mexico, specifically from the states of Querétaro and Hidalgo.

The stems are little branched and usually grow lonely and are a gray-green color.

The leaves are very attractive and are arranged to form compact rosettes that cover the entire stem, in older plants much of the basal leaves can be lost leaving the bare stems in that area.

The leaves are very fleshy and have a cylindrical shape with the pointed apex.

The most striking of the leaves is the gray-green coloration with numerous whitish lines, which gives the impression of angle formations.

These lines cause an optical effect where the leaves appear to have numerous flat and rounded regions.

And these lines that have the leaves make them look like a small diamond.

The flowers are held in a pointed cluster of almost 1 ‘tall and generally have a pale yellow or greenish-white center.

The flowers are reddish in color and are unimpressive and usually appear on plants that are more than one year old.

These are arranged in clustered inflorescences that develop a very conspicuous floral stalk that supports numerous flowers at the end.

Tips to grow and care for the Little Jewel Succulent

The plant prefers bright lighting, but with the shade of direct sunlight during the midday hours.

It is recommended to grow under protective meshes. In temperate countries it can be kept in the sun as long as the temperatures do not exceed 20 ° C.

In shady conditions, growth is disproportionate and weak, considerably affecting the aesthetics of the plant.

Succulents tend to prefer a temperate climate ranging from 60 to 80°F and they love it.

Some can tolerate temperatures as low as 40°F or as high as 90°F. Gardeners sometimes use these extreme temperatures to stress their plant into changing color.

High temperatures from 80°F to 90°F can now and again help keep up the profound hues for some succulents, particularly for delicate succulents.

As the temperatures drop (however remain above 40°F) you’ll notice numerous hues will begin to escalate.

These color are complemented from the cold (yet not freezing) temperatures over an all-inclusive timeframe. Know that temperatures either excessively low or too high can do mischief to your succulents. Temperatures lower than 40°F or higher than 90°F are never suggested.

But for our litle Jewel Succulent

It grows very well in hot climates with average temperatures between 20-35 ° C.

It is susceptible to rotting of stems and roots if temperatures are below 5 ° C approximately.

If grown indoors during winter, give the plant as much light as possible.

The Little jewel succulent compactum is a desert plant with few water needs.

The plant needs occasional watering from autumn to spring. and must drain any excess water.

Being accustomed to droughts, it accumulates a necessary water reserve between its leaves.

Therefore, with your irrigation, you have to be very careful.

In order not to be mistaken, it is best to focus on the state of the soil.

Wait until the soil is dry between irrigation and irrigation.

This adaptation of storing water for later use enables plants to thrive even when water is in short supply.

Because this is the adaptation succulents have made, it tells us it is FAR better to leave your succulents too dry rather than too wet.  They have adapted to survive overly dry conditions.

Remember is better to dry than overwatered

Water is essential for the plant’s health, just like any other.

As those water expand like cells discharge their put away dampness to the remainder of the plant, they attempt to get more water to supplant what they have lost.

At the point when they can’t get more water, and the delicious keeps on depending on the stores being channel, the cells agreement to littler size, the inflatable empties, the once stout and firm leaves falling and withering. This is an unmistakable sign that your delicious needs more water.

To promote healthy roots and to work with the plant’s natural design, water deeply and then give the soil time to dry out.

This is the key to watering your succulents – fewer, deeper waterings. When the soil is dry, water deeply.

On the off chance that the succulent is in a compartment with great waste, set the holder in a plate of water, and let the dirt wick up the water for around five minutes.

At that point expel the pot from the water and let it channel.

Try not to water again until the dirt is dry. On the off chance that the delicious is in the ground or in a compartment too enormous to even think about moving, water at the dirt line, as opposed to from over head.

Be sure not to let the succulent sit in waterlogged soil. Empty any catch trays after about five minutes.

As with most members of the Pachyphytum genus, the litle jewel succulent can tolerate and even thrive in poor soil conditions, provided the soil drains well.

The required soil mixture can be prepared independently by mixing the soil prepared for cacti and succulents, which is sold in a flower shop, with thick river sand and fine gravel in a ratio of 3: 1: 1

Transplanted plants do not need fertilizer for six to eight weeks.

The transplantation of these succulent plants should be done from late winter to early spring.

Keep the pot size the same or a size larger than the old container, since the little Pachyphytum jewel grows less than a foot tall.

Since, larger containers will retain excess water, which is harmful to the plant.

During the transplant, handle succulents carefully, as their leaves can easily fall off the stem.

It can be attacked by mealybugs (sometimes very difficult to remove because they are introduced between the compact leaves), aphids and mollusks (snails and slugs).

Be very careful with the latter because they can devour much of your plant in a few hours.

The little jewel succulent are quite resistant.

However, they are sensitive to human touch, since human skin oils can damage their fluorescent or farin color.

If the growth of your succulent plant seems to have stopped during winter or spring, remove the plant from the pot and examine the junctions of its leaves, stems, and roots.

If you see a white and blurred substance, it is a sure sign of a mealybug infestation.

To solve the problem, remove the plant from its pot and wash the roots of the plant gently.

Use a cotton swab to gently rub the alcohol on the roots.

Remove damaged roots with sterile scissors or a knife and allow the succulent to dry completely before transplanting.

If your succulent looks unhealthy without cause, one of the most common reasons is root rot due to excessive watering.

If the soil is too wet, replace it immediately instead of waiting for it to dry.

Pachyveria Glauca “litle jewel succulent” is a very unique group of plants since they are hybrids of Echeveria x Pachyphytum. Thus, they have characteristics of both genders, but despite the fact that there are several types, in reality, there are only three accepted species, which are P. albomucronata, P. Paradox and P. sempervivoides.

Despite that, they are such decorative plants and so easy to care for that they actually only need well-drained soil, plenty of sun and little water.

This is a relatively new genre, so much so that it was not until 1926 that it was described.

They are characterized by forming rosettes composed of thick and fleshy leaves, almost cylindrical in some varieties, with colors that can be bluish-gray or pink. The flowers bloom in spring, in hanging clusters, and are orange in color.

They do not require any special care, so they are highly recommended for beginners.

In this sense, and to avoid problems, it is advisable to use well-drained substrates, such as black peat mixed with equal parts perlite, pomice or river sand with 30% black peat, or even akadama if you live in a very rainy.

You will love this plant.