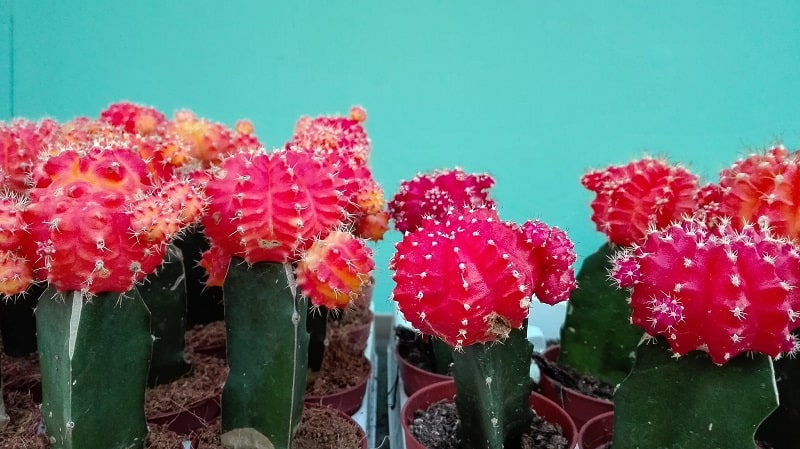 Gymnocalycium mihanovichii “Moon Cactus” is a small globose cactus of the Family Cactaceae very popular in collections around the world as a grafted cactus due to the absence of chlorophyll pigments, that is, the chlorophyll-free varieties are the most cultivated compared to the type species.

This species is native to South America but its ornamental value has caused its expansion to collections from all continents.

The type species is characterized by forming a green globose stem with shades of gray, the apex depressed and with a size of approximately 5-10 cm in height by 5-8 cm in diameter, maybe a little more. 6-8 ribs are pronounced with the wavy margin and the pronounced areolas, that is, the lowest areas of the rib margin are observed between the areolas.

The thorns arise from the areolas (usually 6 but may exist 4-5), they are less than 3 cm long (in some varieties they can be a little longer), very curved and brown.

At the base of the areolas, there are numerous fine whitish structures, similar to small hairs. When the cactus is quite large (some small can but it is quite rare) begins to form daughter plants (asexual reproduction) that arise directly from the areolas.

The flowers are quite striking and usually, appear in the most apical areolas.

They are tubular and quite large compared to the size of the stem.

There are varieties of colors in these depending on the variety; There are cultivars with pink, green, yellowish-white, pinkish-white flowers and others with almost purple flowers.

You can find varieties with yellow, red, purple, orange and nuanced stems due to genetic mutations that cause the inability to form chlorophyll pigments.

This deficiency of chlorophyll pigments makes it impossible to carry out photosynthesis and, consequently, future death; This is why it is necessary to go to the graft for the survival of these cultivars. When they are grafted, they feed on the nutrients produced by the graft-bearing cactus that does photosynthesis.

You will never find a variety without pigments of this species on land because it will never survive.

Tips to take care of the Gymnocalycium Mihanovichii “Moon Cactus”

It is a very easy cactus to keep in the garden and its care when grafted becomes even simpler.

Then your basic care:

It is recommended to grow in places with good lighting but never in direct sunlight.

This cactus can get burned if the sun is very strong. In climates with milder summers, it can be exposed in the morning and afternoon hours.

Always above 15⁰C to prevent the graft from rotting. Lower temperatures destroy the graft tissues and rot the cactus completely.

Generally, the graft-bearing cactus is of the genus Hylocereus and tolerates a wide variety of substrates provided they have good permeability.

If the type species is cultivated we must provide a substrate based on coarse sand, a bit of pine bark, charcoal powder and gravel.

It is recommended to water only when the substrate is completely dry.

Avoid watering with lime-rich waters, these will cause a rise in the pH of the substrate that can be fatal for the type species.

If you observe the formation of branches in the cactus-graft cactus, you must eliminate them at the moment because the cactus (graft-holder) will dedicate its nutrients to said branch and will rot your Gymnocalycium mihanovichii “Moon Cactus”.

It is rarely attacked by pests but the mealybugs can appear, remove them with your fingers or with a brush and neutral soap.

Fungi due to excess moisture can also attack it, use fungicides if you see spots or perforations in the stem.

It is multiplied by seeds and grafted varieties by stem separation.

How to proceed in each case?

The seeds are sown in pots with, for example, vermiculite (for sale here) or with a mixture that facilitates drainage (as a substrate for acidic plants and 50% perlite).

Then they water consciously, and place themselves outside, in semi-shade.

They will germinate in a period of 7 to 14 days.

They are separated when they have a size that is easy to handle and then grafted into rooted stems of Hylocereus protected from direct sun.

For this, what is done is to cut with a previously disinfected knife a slice of one end of the Hylocereus, place the little kid of Gymnocalycium mihanovichii on top, and finally, keep them tightly joined with an elastic band.

You can remove the gum in about a month.

The Gymnocalycium Mihanovichii is one of the most prized cacti, especially for those who do not have much space to have their plants.

And it is that an adult specimen can live without problems in a small pot, about ten centimeters in diameter.

With some basic care, it will bloom year after year, making it look even more beautiful if possible.