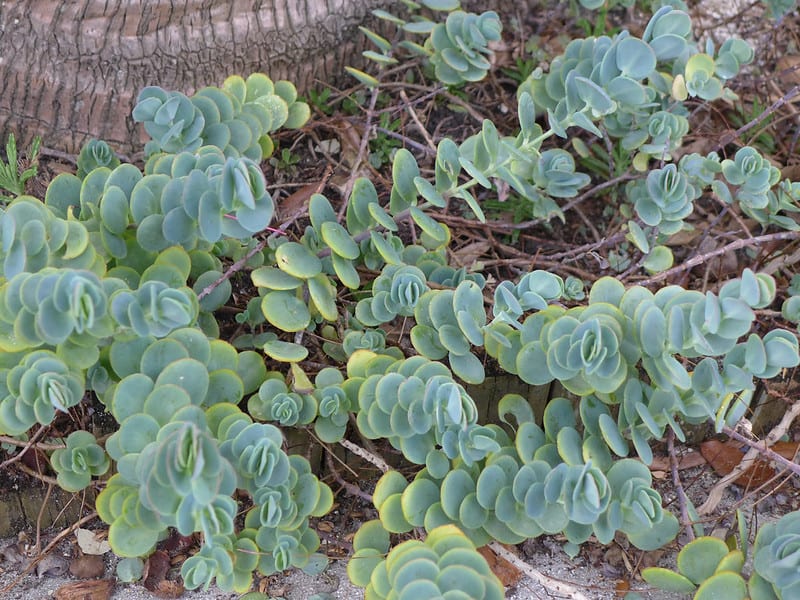 The Kalanchoe marnieriana “Marnier’s Kalanchoe” also commonly known by the name of Kalanchoe de Marnier. This species is part of the Kalanchoe genus that in turn conforms to the Crassulaceae family.

It is known from this plant that is native to Madagascar.

The species of Kalanchoe marnieriana is considered a succulent shrub, which is made up of colored leaves in gray tones.

As the main feature it can be said that the reference in terms of the size of this species is close to 45 centimeters in height up to 1.2 meters in width.

In general, the leaves of the Kalanchoe marnieriana are of a flat figure that are presented in shades of green and blue, in addition, they are usually rounded that are usually presented in the opposite way and are compacted in the same orientation in relation to the tips, giving the similarity with the pages of a book.

It is also known that these leaves usually change their coloration specifically in the winter season, since they are shown in shades of pink.

Tips to take care of the Kalanchoe marnieriana “Marnier’s Kalanchoe”

Kalanchoe humilis is a very easy plant to maintain in the garden. Next, its basic cultivation requirements:

It is essential to provide a lot of lighting to avoid the etiolation of the stems.

The leaf spots are accentuated even more under conditions of intense lighting.

It is recommended to expose to the sun in the early hours of the morning and late in the afternoon.

It grows much better under the influence of high temperatures.

The optimum temperature range for the species is between 20ºC-29ºC. It does not tolerate temperatures below 0ºC for long periods.

It requires a substrate slightly rich in organic matter and with optimal drainage.

Prolonged waterlogging will quickly rot the radical system. Commercial substrates for crass and cacti can be used without problems with an extra aggregate of coarse sand.

Remember the previous disinfection of the substrate in order to avoid the proliferation of pathogens that are in it.

Irrigate preferably after drying the surface of the substrate during hot seasons.

Attacked mainly by mealybugs and mollusks.

The mealybugs cause the fall of the leaves, wilting of the flowers and allow the proliferation of pathogenic fungi.

Molluscs devour sections of leaves and stems in a short time.

It is multiplied by cuttings of stems or from leaves.

To grow “Marnier’s Kalanchoe” from cuttings, use a sterile, sharp knife or pair of scissors. Remove a stem from the main plant, and allow it to callous for several days before placing in well-draining soil. Water whenever the soil has dried out completely.