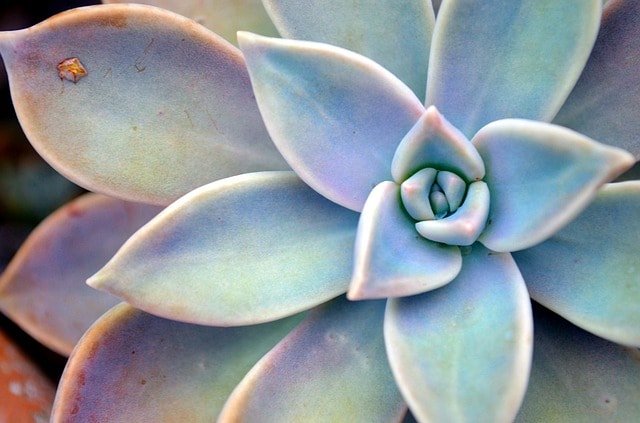 In this article I share the best cold hardy succulents , all resistant to cold and frost.Not only do we talk about succulents that don’t die when they freeze, but about those that really thrive even when the winters are intense.There are two main varieties of succulents that can tolerate freezing temperatures, Sempervivums (commonly called hens and chicks) and Stonecrop Sedums.Most will tolerate temperatures down to -20 degrees Fahrenheit.

Colder temperatures can signal the beginning of a sleepy time of year in the garden, as many plants are preparing themselves for several months of dormancy.

But this next cold hardy succulents can handle low temperatures like a buss.

Probably the most cold hardy succulents on this list.

Almost all the genus of sempervivum are resistant to frost. Many of them are tolerant at temperatures of -30 ° F (-34 ° C).

These succulents are achieved in a wide variety of shapes and colors.

They grow only a few inches and are excellent covers.

Throughout the year they change colors, in response to environmental factors.

They must be in full sun and their only requirement in terms of soil is that it drain well.

It is also called ice plant or pink carpet. This succulent is a cover that requires almost no maintenance.

In addition, it attracts bees and butterflies.

In general, all ice plants love the sun and good drainage.

Among the hundreds of species of sedum, there are some of the best and most colorful winter succulents.

Some varieties of cactus are quite resistant to cold. Opuntia Santa Rita is one of these cacti.

The leaf pads acquire a purple color at the least stress. Opuntia Santa Rita is resistant to cold temperatures up to -30 ° F (-34 ° C).

This succulent silver-colored monocarp is ideal as a cover plant. It is very easy to spread and take care of.

The cold hardy succulents supports temperatures up to -30 ° F (-34 ° C). These succulents require bright light and do not tolerate humid places.

Most agaves can’t stand the cold. But agave parryi is not like the others.

Once planted in full sun, they practically do not require care

This green agave native to Mexico only grows 2 feet (60cm) tall and wide.

It is widely used in modern gardens for its symmetrical shape.

Like most agaves, their care is minimal and requires full sun.

The gray-blue color of euphorbia creates a charming contrast when grown alongside plants with darker foliage.

The flowers appear at the end of winter and in spring.

This plant is native to the Mediterranean and grows in full sun or filtered light.

This cold hardy succulents is resistant to temperatures of 0ºF (18º C).

The succulent red yucca resembles an ornamental grass due to its leaves.

There are also varieties that produce yellow and red flowers.

They thrive in full sun, although they support some shade.

This blue aloe and orange flowers thrive in full sun.

Wait for its beautiful flowers from late winter to spring.

These aloes are native to South Africa, but the family of this hybrid is unknown.

This medium-sized gray-blue Agave serves as an attractive accent plant throughout the year.

I love seeing her planted next to big rocks.

This native of northeastern Mexico prefers to be in full sun. It is resistant to temperatures of 0º F (-18º C).

Palmilla is one of the best succulents resistant to cold. It is native to western Texas and Mexico.

It is widely used in residential landscapes because of its great resistance and the bluish-gray color of its leaves.

The green leaves of Sotol add color to the landscape in winter, often inactive and colorless.

This plant is not at all demanding, it only requires being in a well-drained soil and in full sun.

The sotol is native to Texas and the Chihuahua region of Mexico.

May bloom at a considerable age, forming a tall bloom spike densely packed with reddish-purple flowers.

Use as a single specimen in pots or as a focal point in a small succulent garden. Evergreen.

Although called Red Yucca, Hesperaloe parviflora is more closely related to the Agaves than the Yuccas, and its showy blooms, carried on long, arching stalks, are generally rosy-pink or salmon.

A native of the Chihuahuan desert of northern Mexico, the plant is heat and drought tolerant and recommended for USDA hardiness zones 5 to 11.

The succulent grows in clumps of grass-like, blue-green foliage dominated by flower stalks which may reach 5 feet (1.5 m) long.

A fringe of fraying fibers edge the Red Yucca’s leathery leaves, which spread up to 4 feet (1.2 m).

Flowers are tubular and appear in clusters on pink stalks.

Blooming begins in early summer and may continue for most of the rest of the year.

Categorized as evergreen, the foliage develops a purplish cast in the winter.

Hens and chicks plants are mat-forming succulents that produce clusters of rosettes.

The parent rosettes are the “hens,” and the smaller rosettes that spring from them are the “chicks” or “chickens.”

This low-growing perennial will quickly spread to 2 feet or more in width through propagation or self-propagation.

Although grown for its foliage, hens and chicks do sometimes flower on a tall flower stalk.

The foliage of hens and chicks plants is most typically red, green, blue, gold, copper, or some mixture.

Hens and chicks can be grown in planting zones 3 to 11. Sempervivum species are very cold-hardy and have been known to thrive in winters from Michigan to Colorado, with temperatures to -30 degrees Fahrenheit.

Sedum spathulifolium is a quite variable, succulent plant up to 4 inches (10 cm) tall, producing mats of basal rosettes from a system of rhizomes.

They are sometimes coated in a waxy, powdery looking exudate.

The inflorescence is a short, erect array of many small flowers with yellow petals.

The specific epithet “spathulifolium” refers to the spade-shaped leaves.

When growing Sedums, keep in mind that this plants need very little attention or care.

They will thrive in conditions that many other plants thrive in, but will do just as well in less hospitable areas.

They are ideal for that part of your yard that gets too much sun or too little water to grow anything else.

A common name for Sedum is Stonecrop, due to the fact that many gardeners joke that only stones need less care and live longer.

Sedum is easily planted. For shorter varieties, simply laying the plant on the ground where you want it to grow is normally enough to get the plant started there.

They will send out roots from wherever the stem is touching the ground and root itself.

If you would like to further ensure that the plant will start there, you can add a very thin covering of soil over the plant.

Texas Sotol (Dasylirion texanum) is a showy, very cold hardy succulent that brings the look of the Southwest to wherever it’s planted.

Texas Sotol (Dasylirion texanum) is a showy, very cold hardy succulent that brings the look of the Southwest to wherever it’s planted.

With maturity, the plants will eventually grow a small woody trunk.

Tall narrow flower spikes appear in early summer and make an excellent perch for hummingbirds in the xeric garden.

Cacti shipped early in the spring may be dormant. As the weather warms, these cacti will expand and green-up.

Remember, after an initial watering to settle the soil around the roots, no further water should be applied until the weather warms up.

If plants are dormant and the spring weather is rainy, protect the plants from too much moisture by covering them with a gallon plastic milk container with the bottom cut out.

Leave the top off the jug so heat build up isn’t excessive in sunny weather.

All the species of hardy cacti and succulents require fast-draining soil.

Euphorbia rigida is a small shrub up to 2 feet (60 cm) tall and up to 3 feet (90 cm) wide, with attractive steel blue-green, up 1.5 inches (3.8 cm), lance-shaped leaves arranged in tight spirals around the thick upright stems.

In late winter and spring at branch tips appear the domed clusters of small, green flowers with showy chartreuse-yellow bracts that age to a reddish tan color, as the flowering stems dies back.

The leaves can take on these red hues in late fall as well.

Euphorbias are very easy to care for.

They require a little pampering to become established, but once they are, they are self-sufficient.

In fact, more die from too much care and watering than from neglect.

They are not particular about soil pH, but they cannot tolerant wet soil.

Unlike most succulents, Euphorbia does not handle long periods of drought well.

It may need weekly watering during the summer. Water whenever the soil is dry several inches below the surface.

Water deeply, but don’t let them sit in wet soil, which can cause root rot.

Add some organic matter or fertilizer to the planting hole.

If you are growing them in containers or your soil is poor, feed with a half-strength fertilizer monthly.

Euphorbia can be grown from seed, but they can be difficult to germinate (or even find). It is usually propagated by cuttings.

This can be tricky, because of the exuding sap.

Rooting hormone is recommended with Euphorbias… – See more at: How to Grow and Care for Euphorbia.

Agave ovatifolia (Whale’s Tongue Agave) – A solitary (non-offsetting) succulent that grows from 2 to 5 feet tall by 3 to 6 feet wide with a rounded rosette of short wide gray leaves that are distinctively cupped.

Leaves have small teeth along their margins and a 1 inch long dark gray terminal spine.

It has been noted that this plant has stayed smaller in hot dry locations where water has been withheld but responds well to irrigation and grows much larger.

When this plant flowers it forms a 10-14 foot tall spike with greenish-yellow flowers.

Plant in full sun in a well-drained soil. A drought tolerant plant but it grows considerably larger when given regular irrigation.

This Agave occurs naturally at elevations from 3,700 to 7,000 feet in the Sierra de Lampazos in northern Nuevo Leon in northeastern Mexico.

It was originally collected and distributed by Mrs Anna Nickels as Agave “Noah” but was never properly described or published under this name.

This plant was synonymized with Agave wislizenii by Trelease in 1911 and more recently included with A. parryi.

There is speculation that this plant was distributed in California unnamed but there is no documentation on this or information how this plant performs in cultivation in California.

As it is similar and related to Agave parryi, the presumption is that it will grow as well as Agave parryi does in cultivation – so far this has proven true.

Our original stock plants were purchased from Starr Nursery in 2004.

The specific epithet, from the Latin words ‘ovatus’ for “egg” and ‘folius’ for “leaves”, is in reference to the broad ovate leaves and the common name, whale’s tongue agave, also describes the leaf shape.

The information on this page is based on research conducted in our nursery library and from online sources as well as from observations made of this plant as it grows in our nursery, in the nursery’s garden and in other gardens that we have visited.

We have also incorporated comments received from others and always appreciate getting feedback of any kind from those who have some additional information, particularly if this information is contrary to what we have written or includes additional cultural tips that would aid others in growing Agave ovatifolia.