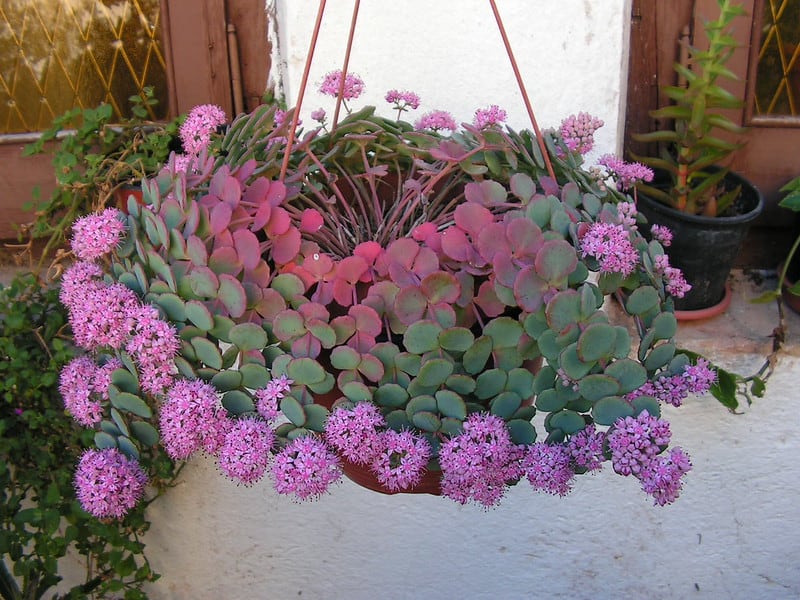 Sedum Sieboldii “October Daphne” is a genus belonging to the family of Crassulaceae that includes between 500 and 600 species of plants spread in temperate and cold regions of both hemispheres with sizes and shapes that vary from species of just 10-12 cm to other semi-fuels.

They can be annual or vivacious.

In Spain, there are several native species.

The term “Sedum” comes from Latin and means “sitting”, due to the way in which some species adhere to the rocks.

These plants are capable of storing water in their fleshy leaves and are usually very resistant to drought periods.

Most Sedum requires sunny places, but they grow well even in the shade in bright places.

The flowers of this genus have a star shape with 5 petals and 5 stamens, and are usually grouped and umbrella.

Depending on species, flowering occurs at different times of the year and shows white, pink, yellow or red tones.

Its ease of reproduction, by cutting, seed or leaf (it immediately takes root in contact with the earth), sometimes makes them invasive.

They are very popular in gardening for the decoration of rockery, flowerbeds, borders or as upholsteries under trees and shrubs.

Some plants of this genus have been used as a condiment (Sedum Reflexum), and others for their medicinal properties, such as Sedum Acre, which was used in ancient Greece as a treatment for epilepsy and skin diseases.

However, and as a counterpart, comment that it contains an alkaloid substance called “piperidine” that, depending on the amount consumed, can cause irritation of the mucous membranes, muscle cramps or respiratory paralysis.

Sedum Sieboldii “October Daphne”, is a plant of Japanese origin formed by long stems with spirally distributed leaves, of a gray-green color that eventually take on a brown tone with reddish edges.

The flowers begin to develop at the end of September or the beginning of October and appear at the end of the stems forming a dense bouquet (umbrella) of small pink-colored florets.

As a curiosity to mention that after flowering begins to lose the stems, leaving only the root, which returns to rebound more strongly in the following spring.

It is an annual plant.

It is a very beautiful plant to place in a hanging basket.

It reproduces with some ease by means of stem cuttings, better in spring and summer.

It hates excess water, so irrigation should be moderate.

In spring and summer you can be outdoors, and thanks for a sunny exposure, but during winter, once you have lost the stems, it is better to remove the pot to a place protected from frost and keep the soil dry.

Tips to take care of the Sedum Sieboldii “October Daphne”

The golden sedum prefers to grow on rocky substrates, but it can also be sown on any type of cactus substrate.

It is very important that no matter what type of substrate you use, you must have good drainage to prevent the roots of the Sedum from rotting.

The Sedum needs very little water to survive throughout the year since it is very resistant to drought.

It is essential that when watering the Sedum in summer, let the substrate dry between irrigation and irrigation.

And in winter times reduce irrigation as much as possible to prevent its roots from rotting.

A singularity of Sedum Sieboldii “October Daphne” is that it adapts admirably to drought thanks to the ability to store water in its thick leaves.

For perfect growth and flowering the temperature between 15-26 ° C.

Tolerates temperature drops if the substrate is completely dry.

The characteristic reddish color of the Sedum will be opposed with full sun exposure.

The Sedum Sieboldii “October Daphne” grows perfectly in full sun as well as in semi-shade.

When the sedum is in semi-shade its leaves have a more greenish color.

You should only take care of the plant from the intense sun of noon in summer.

Is very resistant to pests but some can appear regularly the mealybugs mainly in the unions of the leaves to the stems.

Some mollusks (snails and slugs) can devour sections of the leaves or apical shoots of the younger stems.

It can be propagated from cuttings of stems or leaves.

Just cut a stem very carefully and then let the cuttings (the cutting region) dry for 24-48 hours before being sown.

Then sow the cuttings on a special cactus substrate.

You must only pay the Sedum Sieboldii “October Daphne” in small amounts during the spring and summer and stop the subscriber for the rest of the year.

Only use a specific subscription for cactus and follow the instructions on the packaging.

It blooms in summer.

This is a very beautiful plant to have it decorated in your home or office.

It is also ideal to put them in a pot with other succulents and give a different touch to your collection of plants.

Often described as having the most beautiful foliage and form of all sedums, this adorable little plant looks great all summer long and then really comes into its own in fall.

Sedum Sieboldii “October Daphne” is a low, spreading species that forms a rounded mound, sending out horizontal branches from the central crown.

The 3/4 inch round, blue-green leaves are borne in 3s around the stems and each leaf is narrowly outlined in deep pink.

During the hot summer months, this pink edge intensifies.

One of the most beautiful features of this perennial is its fall color. When sited properly, the foliage turns beautiful shades of pink, red, yellow, and orange.

Often, the plant is still flowering when its fall coloring begins to appear.